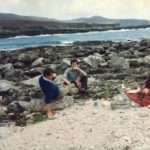 The summer of 1982 and we arrived in the town on 15th August. It did not occur to Protestants that we would drive into the middle of a fair. Deals were being done and livestock being moved and the town filled with people. This was an Ireland of colours different from those of the North; of soft accents and gentle tones.

Going to a pub on the first evening was a moment from J.M. Synge. Words exchanged at the bar led one man to following another to the toilets and a third to burst back into the bar, “Call the priest! Call the ambulance! He’s killed him! Call the Guards, someone! Call the Guards”. The flurry of excitement passed and people resumed their conversations.

Stepping onto the street in the evening air brought a whiff of sweetness; fires lit for some late evening warmth in the coolness of an Irish summer.

The house was in a terrace, a spacious place with a telephone from the past; black bakelite, but without a dial; instead a button on top was pressed to reach the exchange. It failed to work and a man from Posts and Telegraphs arrived one morning. Turning over the telephone, he slipped out a large, blue Ever Ready battery and replaced it with a new one.

The days were filled with journeys and encounters. Photographs remain of a picnic on Achill Island and memories remain of conversations. The conversations made the week special; our hosts thought there no better way of spending an evening than sitting and talking. It was a magical experience: stories and arguments and laughter filled every hour. Years spent in hotels could never match sharing the warmth of the table companionship of a large family. The evening meal brought tales of the day and banter between our contemporaries.

Being respectful, we attended Mass with the family on the Sunday morning. The single Protestant church in the town had been closed for some years. Occasionally, the liturgy would slip from English into Irish, the first time I had heard it spoken by a large number of people.

There was a church gate collection on behalf of Fine Gael, the political party then in opposition. I took a pound note from my wallet and put it into the basket. At lunch, Paddy, our host and a strong Fine Gael man, handed it back. “This is yours”.

I handed it back to him, “No it’s yours. I want to see Fitzgerald back in power”.

There was a sadness when the time came to move on. Summers do not last and Belmullet would sink into the greyness of an Irish autumn; but for a moment we had enjoyed a place where community and friendship and hospitality had a story-book quality. Like all memories told of younger days, the time loses nothing in its recall, but perhaps it was finding such a quality in the place that inspired the words of Synge.