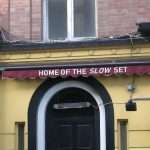 Banjo music on a favourite programme was sufficient motivation to switch off the fifty year old wireless set and turn on the Roberts internet radio. If the FM frequency on the wireless here is sparsely populated, the problem with the Roberts radio is the opposite – there are hundreds of stations, finding the same one twice can be a problem. “Stick with what you know”, brings a 70s station, the “British Hustle” is playing: it is disturbing.

There weren’t many things that inspired fear in the late 70s. Going to football matches where full scale fights took place was never a worry, stand to one side, watch the game and no-one took any notice of you: it was easy to be invisible. Attending rock concerts never prompted a moment’s hesitation, people went for music, not hassle.

The “British Hustle”, and music like it, was far more threatening than a fight between Chelsea fans and their opponents, or a gang of bikers gathered for a gig, it was the sort of music favoured by people who dressed in a particular way, who went to particular discos (as they were known then) and who were into particular ways of dancing. I’m never quite sure, but they always seemed much more cosmopolitan, much more sophisticated. I always avoided such company and I would never have had the confidence to set foot in the clubs. I always had the wrong clothes, anyway. Far better to encounter a greaser with big boots and studded leathers than one of the in-crowd.

Even now, there are radio stations, where programme presenters arouse that sense of being intimidated; the ones who speak with their own patter, their own language, their own vocabulary, which would have excluded people like me in those far off years, those who play music that would have filled 1970s dance floors lit by glittering lights.

Such fear is entirely illogical, the people who went to the discos weren’t particularly cosmopolitan or sophisticated; they were just people who would have spent their money on clothes and looked forward to the weekends, dressing up and enjoying nights out.  They were not aggressive, they were not violent, they were hardly dressed for a fight; the discos organised by our sixth form college, where one pub banned further such occasions, were considerably more dangerous than the slick venues policed by bouncers at the door.  Why should the “British Hustle” cause discomfort? Perhaps it is that most primeval of all fears, the fear of the unknown.