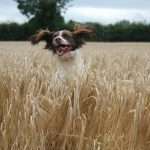 The Irish Farmers’ Journal calendar picture for August has about it a joy and a melancholy. The dog leaping in delight among the ripened grain evoking August days of youth: an uncle’s spaniel following the harvester in anticipation of rabbits breaking cover, the scent of tractor exhaust, the feel of hessian sacks, shouts and laughter of men gathered for the day.

The harvest moon filling the Laois sky this evening called attention to the fact the summer was dying, that in the cheer of the harvest there was the gloom of the shortening days. The golden disc conjured memories of Somerset late summers in the 1970s.

The county derives its name from ‘somersaete’, alleged to mean the summer lands. Centuries ago much of the county would have lain under water for much of the winter, only in the summertime when the waters retreated would the county assume its full dimensions.

Perhaps it was being taught such things in school that gave the harvest moon a melancholic tinge, more likely it was because the harvest moon marked the end of a season of outdoor and sociable activity. Walk down the road as a harvest moon rose and fields that a few weeks previously had been filled with grain awaiting harvest were now reduced to stubble; the last hay had been made; in places ploughs would have turned the ground. There was a sense of an ending, of things being over, of moments gone for another year.

The harvest moon marked more than just the end of an agricultural season; it announced the arrival of dark evenings; of people who would have been seen every day during the weeks of summer being now rarely sighted, of an unconscious bond that existed with all those around on summer days being severed until spring.

The harvest moon conjured memories of those whose faces were familiar on those long summer days; gnarled hands, weathered features, strong arms, soft voices. A cheery wave as they passed going about the tasks that filled every waking moment in those summers. Not just making hay while the sun shone, but doing everything possible while the sun shone, for the days would soon arrive when the summer lands retreated. Like the passing of the seasons, the faces have gone, those whose youthful laughter and bicycles travelled the roads are now those of the lined faces.

Only the harvest moon remains unchanged, that, and spaniels enjoying sunny days.