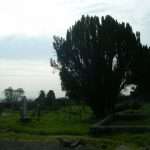 The closing lines of his poem The Lift capture a sense of the honour bestowed in sharing in that final journey:

They bore her lightly on the bier. Four women,
Four friends – she would have called them girls –
stepped in.

And claimed the final lift beneath the hawthorn.

The etiquette is that those closest begin the journey, carrying the deceased from the family home, and those closest complete the journey, usually to the graveside where the coffin is taken by the undertakers and gravediggers and, with great solemnity, lowered into the ground, inch by inch. Heaney knew how important is that final lift; how much it says about the closeness of the relationship with the deceased for someone to claim those last steps.

To an Englishman, it seemed a custom of deep harshness, that the physical weight of bereavement should be added to the emotional pain. Once, watching a bereft father carrying the tiny white coffin of his toddler son to the gaping hole in the earth where prayers would be expected, the words caught in the throat and the eyes filled with tears.

Yet burying my grandmother in Somerset in 2007, in a ceremony conducted with immaculate professional decorum by the local undertaker, there seemed an incongruous moment as the professional pall bearers stepped forward to carry her coffin from the beauty of the medieval English parish church. Who were these strangers to carry her remains on their last journey? Perfectly attired, precisely in step; they could not have been faulted, it was just they were not part of the culture I had come to know. To see family members carrying the coffin would have seemed as odd to those who followed to my grandmother’s graveside as seeing paid pall bearers would seem to mourners here, our traditions are just different.

A Co Wicklow undertaker once explained to me the importance of the committal, the sense of finality, of the book being closed, of the completeness. There is something in the custom of the final lift that gives a tangibility, a solidity, a substance to the moment. Heaney could have explained it.