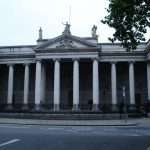 The Bank of Ireland cashtill this evening swallowed my card. I had inserted it, put in the PIN number, selected the amount of cash I wanted and been told to withdraw the card to obtain the cash – except the card had never come out. Upon telephoning the customer service line, I was told by a less than helpful surly voice that my card would be destroyed and that I would need to apply to my own bank for a replacement.

It is never happened to me before, and I have had an ATM card for thirty-four years. In 1979, having a card to take out money was something new and exciting. The National Westminster bank on the Aldwych had a till which was a fascinating combination of the mechanical and the electronic. The ‘menus’ were printed on a black rubber roll and rolled backwards and forwards behind a glass screen, like the destination boards on London buses, the choices would be aligned with buttons that were pressed to make one’s selection. 4785, the PIN number still remains in the memory.

The tills dispensed £5, £10 and £20 notes, though it would be rare to have occasion to need a £20 note. Tickets for Wembley to watch England play in the European Nations Cup qualifying group matches were £2 each; a pint of beer was 32p, and on half-price nights it was possible to get six pints for a pound.

The reason the card remains so strongly in the memory is that there seemed a never ending supply of £5 notes. The student grant in those days was exceedingly generous. Even half board in a hall of residence cost only £350 a term and the full student grant was £2,000 for the year, £700 for each of the first two terms and £600 for the third, plus travelling expenses incurred above £50 per year.

Unless one was completely profligate, the full grant was sometimes hard to spend. Go to see the Royal Shakespeare Company on a Monday night and student seats were £1.10 instead of £6.60. The two most extravagant nights out were going to see Woody Allen in ‘Manhattan’ at a Leicester Square Cinema, which cost £3 – half as much again as a ticket for Wembley – and going to a Leicester Square disco for students from all over London, which had a reduced entrance charge but charged 60p for drinks.

Not only were they days of having cash to spare, they were days when being a student was a passport to reduced prices. Good old British Rail still had fares that people could afford and while the student railcard could not reduce fares below a certain minimum during the week, the 50% reduction was subject to no minimum at weekends. Visiting a friend in Brighton one weekend, a single ticket out to Falmer, where the university was located, cost only 8p or 12p, or something so small it was hardly worth requesting the reduction.

Money has never been so plentiful since. Sometimes I wonder if National Westminster Bank would give me one of their cards again. I would ensure I never used it in a Bank of Ireland ATM.