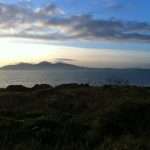 There’s a chill in the evenings; it recalls Frank’s ashes.

The first week in September was always an intense time. A month away meant that a series of concerns would have arisen and the first few days of the month were times with as much as possible compressed into them.

News of Frank’s death had reached me in a phone box outside of Bordeaux. I had been talking with a neighbour when her husband had come in to say that Frank had been found. Walking across his yard with a bale of straw, he had just collapsed and gone.

I never knew what age Frank was. He was never fond of forms or offices or taxes, and, although well past retirement age, I wasn’t sure he even drew a pension. He was certainly too independent a man to look for grants from anyone, his farmhouse had no tap in the kitchen; water came from a pump in the yard.

Frank didn’t like clergymen, which was OK, I wasn’t there to be liked. He finally accepted that I would call anyway and we would sit at the kitchen fire and talk.

Frank was a story book character. He was incredibly strong, but with the tenderness that goes with a life lived close to the richness of nature. There had been a ‘understanding’ with a lady for years. ‘It’s a good thing we never married, we’d have been divorced three times”.

Frank’s dislike for clergy had stemmed partly from a row that had taken place over the renting of land that belonged to the church, six acres of pasture running between the Rectory and his land; partly it stemmed from Frank just being his own man, he would have no-one telling him what to do.

Frank left instructions that he was to be cremated and his ashes to be scattered in the meadow on rising ground to the back of his house. I was still young enough at the time to be troubled by an edict from the bishops explicitly forbidding the scattering of ashes.

The funeral was past by the time I had got home, the issue of the ashes to be resolved. I phoned my colleague in the neighbouring parish, a wise man. Frank had left instructions in his will regarding the disposal of his ashes, no letter from a bishop could countermand the intention of his executors to fulfil Frank’s wishes. My colleague pointed out that whether I was there or not, the ashes would be in the meadow.

So it was on an evening in early September that a dozen or so of us walked up into the middle of a field. I read from the Bible and then we had some prayers and then Frank’s final remains joined the land he had loved so much. Anyone driving down the road would have wondered at the circle of people in a meadow as the light was fading.

September was an intense time.