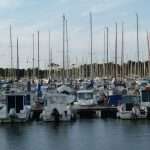 The 550 mile journey from Cherbourg was comforting. The trip involved no flight, no airport, no anxiety about delay. Flights cause a constant fear of lateness, arising from a moment twenty years ago.

It was a first opportunity of flying to London for a meeting. In Northern Ireland, in 1993, flying somewhere for a day was still a deluxe day out. They still served complimentary drinks and free meals on the planes and flights were assumed to be to Heathrow Airport.

The drive to Aldergrove was filled with the excitement of a child going on holiday. The car was left at one of those car parks where the keys were left with a staff member and a courtesy bus ran to the terminal. Boarding the flight with a shiny new Samsonite briefcase, the seats were filled with suits, who in those days before laptops and other electronic devices, earnestly studied the business pages of newspapers and or flicked through thick reams of briefings for meeting.

The purpose of the day is long gone from the memory, even its location is forgotten, the most important moment of the day for someone aged thirty-two, going on eleven, came in meeting an old friend in a Holborn pub at six o’clock. A banker who criss-crossed the Atlantic, his lifestyle was exceedingly more exotic than that of someone living in a rural corner of Ulster, but for one moment, it felt that our worlds met.

The two hour encounter of the different worlds caused the problem. Suddenly it was eight o’clock and there was the matter of catching a 9.25 pm flight.

Attempting to remain nonchalant, the walk to Holborn tube station was anxious. The train seemed to take an age to arrive and then for some reason everyone had to leave it at Barons Court. It was 8.30. How many more minutes to Heathrow? if the first train took an age to arrive, the wait for the second lasted an eternity. It seemed to crawl. It was after nine before Terminal 4 was reached, and then the train paused while minute after minute ticked away.

The tube station for Terminals 1,2 & 3 was reached at 9.25, the departure time. The run from the station was made with a pounding heart. “Sir, the flight has closed”, called a member of the ground staff.

“Keep running”, said a voice inside, “keep running”. The airbridge was reached and the noise of of running steps echoed inside it.

A steward stood in the doorway of the plane and glared. “Sir, you are very late”.

It was ten minutes before it was possible to breathe properly. A delay in the arrival of catering trolleys had held the flight up and made the run worthwhile.

For years afterwards, there would be nightmares about being in distant parts of London with a plane to catch in an hour. Airports are now reached with hours to spare, or, preferably, are not part of the itinerary at all.