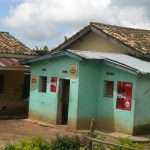 “Perhaps she wanted to brighten the room up”.

“Yes, but why turquoise? It seems the universal colour of poverty”.

“I wouldn’t have thought so. It was once very expensive. It was a mineral that came from Turkey”.

He was undoubtedly correct, but the historical antecedents of the colour did not detract from the fact that in the Philippines and East Africa I had seen numerous occurrences of a shade of turquoise rarely seen in Europe, and here, as recorded by the BBC cameras, the colour dominated the room of a poor woman in India.

Why turquoise? Maybe the paint comes cheaply; maybe there is a perfectly sensible explanation for its prevalence.

If there is globalisation of the lifestyles of affluent people – fashions, consumer goods, cars, technology, travel – sometimes there seems a globalisation of the lifestyles of those who live in poverty. Often, such globalisation is simply a matter of economics: rice is eaten because it is affordable; bicycles are ridden because motorised transport is beyond the means of those who ride them; European and North American style of clothes are worn because they have come from China very cheaply, or have come second-hand from former owners in wealthy countries.

Other things seem a matter of image, or marketing, or whatever it is that persuades the poorest of people to part with money for things that they cannot afford and do not need. One can stand in African villages that lack even the most basic of amenities and see signs advertising Coca Cola. In the Rwandan village of Vunga last autumn, it was selling at 250 Rwandan Francs a bottle, about 33 cent or 28 pence Sterling – a large fraction of what a poor person might earn in a day. Frequently in towns and villages, boys wore soccer shirts to demonstrate their support for their favourite club – Manchester United or Arsenal or Chelsea. Young men everywhere seemed to have mobile phones, hardly a conversation took place without at least one of those present breaking off to take a call.

After the most basic needs are met, food, clothing, shelter, health care, perhaps much of what we spend afterwards, whether in an African village or in a European city, depends on our sense of image, our sense of style, our belief that certain things say something about us.

But if it is all about image, style and preference, what’s the big deal with turquoise?