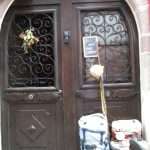 Early afternoon in Saint-Jean-Pied-de-Port and the walkers begin to appear in the town. The hostels open at 3 o’clock, some of the pèlerins look as though they have been walking since early morning and will welcome the opportunity of rest and refreshment. In the most part indistinguishable from back packers, the seriousness of their quest is marked out by the carrying of a stout stick and a scallop shell tied to their rucksack. The coquille Saint-Jacques is the trade mark of those on the camino, the great pilgrim trail to Santiago de Compostela. From Saint Jean, the route climbs sharply through the Pyrenees before descending into Navarre. How far after crossing the mountains – another 500 miles?

There are times when the camino seems an attractive thought; a full Irish camino, getting the card stamped at the Saint James’s Gate church in Dublin and then setting off on the great walk down through France before joining the main throng at Saint Jean, but, upon reaching Santiago, there would be a great sense of disappointment. I do not for a moment believe that the remains of the apostle James were found buried in a field in Galicia in the Ninth Century, such a claim has more the mark of the medieval church than any touch of a close friend of Jesus. The journey would be interesting, but it would be a journey without a point: reach Santiago, and then what?

Bishop John Saxbee, former Bishop of Lincoln in England, describes his experience of Ascension Day in the Belgian diocese of Bruges, with which the diocese of Lincoln had a long-standing ecumenical relationship. The pilgrimage around the city is led by people carrying a jewel-encrusted gold reliquary, reputed to contain a phial holding drops of the blood of Jesus gathered by Joseph of Arimathea. Saxbee is sceptical about the pilgrimage, but sees it not in terms of the relic, which he does not believe to be authentic, but in terms of the pilgrims themselves:

“Above all, I think it was to do with walking in the footsteps of faith. It was not so much the relic that mattered as the people who carried it, looked upon it and treasured it for hundreds of years. It was not the relic which was the guarantor of their faith, but their faith which guaranteed the relic an aura of sanctity and a lasting place in our affections. This seems to be at the heart of a growing urge to go on pilgrimage, and so follow in the steps of those who have gone before us as followers of the Way. Surely for such pilgrims the authenticity or otherwise of an object or person or event linked to the place of pilgrimage is less important than being in via with those who have walked this way in the past and whose faith and hope inspires us still” “No Faith in Religion”, p.66.

Perhaps the camino is a similar experience, it is not the arrival in Santiago that is significant, it is the journey to get there that matters.