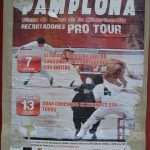 A pleasant afternoon in mid-September and the city slumbers in a Sunday restfulness. Traffic is almost n0n-existent; promenaders stroll the city walls; Compostela-bound pilgrims stride determinedly through the streets. It is hard to know how much of 21st Century Pamplona Ernest Hemingway would recognize, it is ninety years since he first visited the city, more than fifty since his final stay. Eight times Hemingway stayed in the city for the San Fermin festival, the week that began with the running of the bulls and which included bullfighting each evening.

A bullfight seems a very structured affair. The corrida involves three matadors who each fight two bulls over the course of the evening. The matadors have their own teams who are responsible for the opening stages of each fight; the team members include picadors, who are on horseback and are responsible for piercing the bull’s neck with lances, and bandilleros, who put banderillas, spiked wooden sticks, into the bull’s shoulders. After the preparatory phases,the matador steps in, initially with a large purple and yellow cape, and then with a smaller red cape and sword. The matador aspires to meet the bull with elegance and skill and to kill it quickly and cleanly. If the crowd judge he has done well, they wave white handkerchiefs and encourage the president of the corrida to reward him with one or two of the bull’s ears or with its tail.

It is mystifying. Tens of thousands of people gathered for music and food and celebration; traditions running back centuries; tickets that are almost unobtainable; elegance and style and careful choreography; and it all ends with a bull, bleeding from previous wounds, being stabbed in the heart with a sword. Yet bulls at corridas are from particular breeding lines, raised strong and well for four to six years, they are animals very different from those that provide the beef for kitchen tables, which end their days with a journey to the abbatoir and ignominious slaughter.

The thought of attending any corrida, whether during the San Fermin festival, or at any time anywhere else, is too much for my sensibilities, but, short of becoming a vegan and giving up meat eating altogether. it is hard, without more than a hint of hypocrisy, to condemn those who throng the ring at Pamplona. 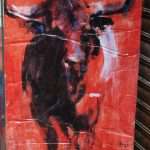