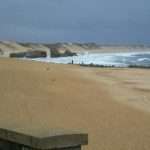 It wasn’t a nice evening. Bank upon bank of grey cloud made inexorable eastward progress across Biscay, a chill breeze blew in from the sea. The vast car park held no more than half a dozen vehicles. Ticky-tacky buildings accommodating shops and cafes were firmly closed against the elements; a single bar remained open, its two customers hardly providing a lucrative trade.

Crossing the dunes and reaching the beach, the great vastness of the Landaise coast swept away toward the Gironde. Two surfers made the best of the unpredictable waves; hundreds of metres apart, they seemed intent on solitariness. Visible to the north, a couple walked with their dog; the woman’s bright red jacket contrasting with the greyness of the sky and waves.

There appeared from seemingly nowhere, two figures. He carried a bag on his back and a fishing rod in each hand; she walked just behind him, chatting as they walked along. A night fisherman, one of those who appear after everyone else has gone home, one who enjoys the beach in the dark hours of silence. Was he going to fish alone, or would his companion remain, sitting with him staring out into the darkness of the Atlantic?

It seemed a picture of perfect contentment. To be able to walk down onto the beach for a night’s fishing suggested no other demand upon his time; no need to be anywhere in the morning; no need to worry that someone might be looking for him, or that someone might phone. To be a night fisherman meant freedom, not a worry in the world. Perhaps back in the car there would be a flask and sandwiches; perhaps the lady with him would remain for a while and then return home; perhaps she would arrange to call back at some late hour, or wait until morning time.

To sit there, watching, feeling for a tautness in the line; slowly winding in the baited hook and weight before, once more, casting them deep into the surf; pushing the handle of the rod deep into the firm sand and sitting down, waiting to catch sight of movement of the rod’s tip; seems a pastime of perfect contentment. Or perhaps it takes a perfectly contented person to pass their time in such a way.

As someone with a boredom threshold of five minutes, sitting on a beach for half an hour might be acceptable, or even for an hour, but then there would be the urge to go to do something else. Perhaps the aspiration should not to be a night fisherman, but to possess the sort of contentment that would make it possible to be one.