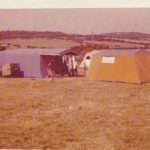 A photograph posted on Facebook from August 1973 recalls memories of a holiday forty summers past. Moments from such times remain fresh long after recent times are forgotten.

The holiday had been long anticipated. Friday evening was spent in anxious waiting for my uncle, aunt and their family with whom we would holiday. Leaving Gloucestershire on a summer weekend evening in those pre-motorway days; darkness had long fallen before they arrived. No matter that the hour was late, we would travel to Cornwall through the night hours to avoid the traffic Saturday would bring.

Not wishing to miss a single moment, I endeavoured to stay awake by opening a quarter-light in the window of one of the rear doors. Of course, I failed; being twelve years old and staying awake all night were not compatible. Two images remain from the journey: stopping at an all night filling station where petrol was obtained by inserting fifty pence pieces into a slot in the pump and my uncle driving straight on through a mini-roundabout, something that was then a novelty, and the trailer he was pulling leaving the ground as it crossed the raised surface at speed.

By six o’clock in the morning we were at a campsite at Perranporth, but its cost sent us westward until reaching a campground outside the now fashionable resort of Saint Ives, a place where, forty years ago, it was possible to find somewhere to park. Days were spent on the beach and evenings were a time for walks and visiting the town. Pubs were strict about admission in the 70s, and while parents might have gone into the Sheaf of Wheat Inn, those of us of younger years had to sit outside with our lemonade and crisps (years later, I would tell people I had drunk in the pub when I was young – it wasn’t a complete lie).

The odd thing is that the photograph my father posted prompted his recall of a particular moment, a moment that was remembered by other members of both families: the sighting of someone dressed as a highwayman. The sighting is entirely absent from my memories of our week there. If 50 pence petrol pumps remain in the consciousness, it is odd that something so unusual should altogether disappear. Perhaps I had not been in their company, though that seems unlikely, at twelve years old, I would hardly have gone somewhere by myself.

There are moments from the past when there seems to be a heightened awareness of things, moments when the layer of time between things long past and the present reality seems very thin; there are moments when you almost expect to see people as they were in the scenes that replay in the mind. Then there are other moments which strangely disappear. Perhaps the subconscious, in its editing out of images that might disturb, simply excised the highwayman. A pity, I always liked highwaymen and smugglers and the shadowy characters that filled the storybooks of childhood days.