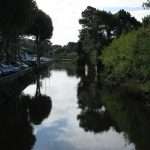 It seems a favourite among Gold stations, perhaps because the tune is easily memorable, perhaps because the enigmatic words have a feeling of the poetic. America’s “A Horse with No Name” is always listenable. Perhaps it is because it evokes perceptions of the country sharing its name with the band shaped by childhood television viewing, perhaps it’s because the lyrics have retained a sense of mystery. The song is filled with image and allusion, it includes the words:

A river that was dead? It’s something easily imaginable in arid places. Rivers that are seasonal, appearing for part of the year, only to disappear in the dry season, are common enough. One would hardly be sad if one met a river that was absent, but would return in the near future.

Discovering a river that was dead in France last month created a sense not of sadness, but of fascination at what the landscape might have been if the river was still present? Having visited Bayonne, Capbreton and Vieux Boucau on many occasions over the years, only this year did we discover that the mighty river Adour that reaches the sea at Bayonne had originally had its estuary miles north at Capbreton and that from 1310 to 1578 had run even further north to reach the Bay of Biscay at Vieux Boucau. All that remains now are lakes that were once part of the water course. It is hard to imagine the waters of the Adour flowing through these now tranquil places.

At least the Adour still flows, its absence from towns in Landes due to deliberate action rather than its death. Visiting Tanzania in 1998, women dug at the bottom of a wide trench that ran under a bridge, digging deep in a search for water.  The trench was all that remained of the river that had once irrigated the area. In the rainy season, it still appeared, but as no more than a fraction of its former self. Land for miles around was arid, barely more than desert; odd baobab trees dotted the landscape, it was hard to imagine the land as an old man described it to us. A photograph was produced to show us what had been there in 1970 – a forest all around. Deforestation and climate changes had killed the place. It was sad to think the river was dead; but it was not just the river, it was the entire place, and no song would bring it back.