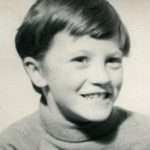 Perhaps it was part of a story Miss Rabbage read to us in the junior class at primary school, perhaps it was from one of the worthy programmes that the BBC would screen during Children’s Hour; it was hardly a story I would have chosen to read for myself. Only the beginning of the story remains in the memory, and the details are so scant that no Internet search has produced any suggestion of what the title of the story might have been, let alone who might have been its author.

The story told of a boy of, perhaps, six or seven years of age, taken on holiday each year by his parents. It must have been one of those pre-war English middle class families where being schooled at home by a tutor was not so uncommon, for the boy seems neither to attend school nor to have friends. The family take their holidays in October, long after everyone else has gone home, and the boy spends hours in solitary play on the beach.

And that’s where memory of the story ends. Perhaps Miss Rabbage read no further than the opening pages of the story, or, if it was on television, perhaps the viewing of the programme was interrupted, in times when opportunities to view a broadcast came around only once. Yet, on my 53rd birthday, the moment remains a powerful presence in the memory, some element of the story must resonate with with something deep in the psyche.

The beach in October is an image filled with foreboding. Instead of the warmth and blue skies of summer, there is a chill greyness and a feeling of being exposed to the coming winter storms. Seasonal contexts seem to change perception of places, somewhere attractive and inviting can become somewhere fearful and intimidating. Was there a sense of the vulnerability of the small boy as he played alone on the sands?

Perhaps the onset of autumn was the source of the fear. Had the story told of parents taking the boy on holiday in April, its mood would have been different. The lengthening hours of daylight and approach of summer warmth would have imbued the tale of the brief moment with optimism and positivity. Instead, October means the days are shortening, the light is dying, the days on the beach will be fewer; the mood is gloomy.

Perhaps the lingering impression from the story was that of isolation, of an all-encompassing loneliness. How did that boy feel, standing alone on that beach, always alone? When he watched other children, what thoughts would have gone through his head?

The questions were silly; the boy did not exist, how could one know how he felt? Had the story progressed further, it might have been light and happy; the boy might have gone on to do great things, yet he remains forever on that English shore.

A psychiatrist would make much of such memories, the vulnerability, the fear of loneliness. If someone knows how the story turned out, would they let me know; it might then be forgotten.