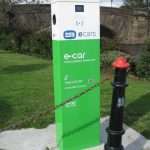 This year’s birthday present was a copy of Father Browne’s Laois, a selection from the extraordinary collection of 42,000 photographs taken by the Irish Jesuit priest Francis Browne. Born in 1880, his first photographs were taken in Paris in 1897 and the vast collection includes pictures from the maiden voyage of the Titanic (Browne left the ship at Cobh, before the ill-fated crossing of the Atlantic). Some 7,000 photographs were taken in Co Laois, where he lived at Emo Court for 28 years, from 1928 to 1957.

Turning the pages of the book, the images that command attention are not those of big houses, or of natural features, which tend not to change much, anyway, but the studies of the ordinary things of everyday life. A girl of three or four years of age stands looking at newspaper boards for the “Irish Press” and the “Irish Independent” for Monday, 16th October 1939, (74 years ago yesterday); no clue to the dark storm clouds over Europe is given in headlines which announce “Offaly’s surprise win over Laioghis.” The single photograph from Mountrath, my own parish, shows a cart filled with turf being unloaded outside a shop; local inquiry would undoubtedly reveal the precise location of the shop and the identity of the man wearing the tweed cap, torn coat and ill-fitting, worn boots.

Our natural inclination when we have a camera is to photograph the landmarks, the famous sights, the beauty spots, the popular locations; look at any family’s holiday albums. Most photographs taken by visitors major cities will feature numerous views of familiar places, differentiated only by the quality of the camera, or the imagination or skill of the photographer. There will be few pictures of the commonplace things of daily life. Returning from holidays, it is the landmark pictures that matter, but what of thirty or forty years later? Photographs of landmarks will be plentiful; the Internet will provide us with thousands of images of the Eiffel Tower or Buckingham Palace, but the familiar things from the times will no longer be so familiar and their pictures may be rare.

If our photographs are intended to capture memories of a time and the spirit of a place, then photographs of turf carts are much more important than pictures of big houses; photographs from the street and the market are much more important than pictures of castles and palaces. Who would think of taking a picture of an aisle of Tesco, or the forecourt of a filling station? Those are the pictures that will evoke nostalgia, that will give future generations a perspective of the past as it was, that other country where we did things differently.

Father Browne’s genius was in capturing the everyday moments, preserving forever people and times gone in a generation. In the days of digital cameras, recording 42,000 images is a prospect far less daunting than the plates and negatives with which Father Browne worked. Perhaps next time a group of people are taking pictures, the thing to do will be to photograph the photographers, or to consciously record the things they have ignored.