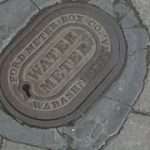 Trevor McDonald’s ITV programme reports on prison life in Indiana in the United States. It is the sort of feature that risks a stereotyping of United States life in the Midwest; as if life were uniform and unremarkable.

The town of Wabash, Indiana was the first electrically lighted city in the world. With a population of 10,666 in 2010, it’s not the biggest of places, but has a century long history of industry. Being someone always fascinated by local histories, it was interesting to read the history page of the Ford Meter Box Company which is based in Wabash, Indiana:

No definite date for the birth of the company can be found; however, a patent application for the original Ford Meter Box was filed on December 20, 1898. It can be assumed that this is the birth year. The company had few material assets; in fact, it consisted mainly of the ideas and dreams of the founder, Edwin Ford.

After losing an investment in a glass company in Gas City, Indiana, Edwin Ford returned to the home he owned at 213 East Kickapoo Street in Hartford City. He took a job with the new water works in Hartford City and was soon appointed its first superintendent in 1895. Edwin was concerned about the heavy demand for water, caused by customers wasting the cool water by running constant streams to preserve milk and butter. There seemed to be no solution except to meter all customers. The problem was where to locate the meters.

Most houses in Hartford City had been built without basements, making indoor meter placement very difficult. Meters could be installed only in some kind of an outside pit and Edwin set about the task of designing such an arrangement. He dug a hole in his yard and covered it with a wooden lid. He hung a thermometer from it, which he adjusted to different depths. In cold winter weather he would dash out to read the temperature and from his observations was able to work out the design of a meter pit or “meter box” which solved the problem of meter freeze-ups.

The very first meter boxes were made of three foot lengths of vitrified clay tile about ten inches in diameter. A cement bottom was cast at one end of the pit and vertical lead pipes topped with meter couplings extended a few inches from this enclosed bottom. An inner frost lid of wool and felt was placed about half way down to protect the meter from freezing along with an iron ring and lid cemented to the top. The entire town was metered with these boxes, making Hartford City Water the first utility in a cold climate to have all meters installed outside at the curb.

Edwin had no intention of producing meter boxes for other than local requirements, but word of the unique program at Hartford City was spread to neighboring towns by meter salesmen. Edwin was approached to make boxes for other utilities. He agreed, and these first meter boxes were made in Edwin’s basement in his spare time and pulled out of the basement window on a cart with baby buggy wheels, running on an improvised track. Thus a new business was born and the logical name of The Ford Meter Box Company was adopted.

Edwin Ford may have not planned to produce meter boxes for other than local requirements, but his products reached unlikely places. Walking down Kilkenny High Street, an unexpected address is easily found on a water meter cover, set into the stone pavement.

What were the economics of selling Indianan water meters in 20th Century Ireland? Why don’t television programmes cover such stories?