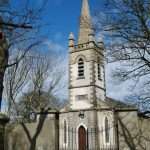 An autumn day twenty years ago and a funeral was about to leave a country church. The funeral director is understandably concerned at the fragility of the brother of the deceased, who has stepped forward to help carry the coffin down the aisle. The fragile sibling snaps at the black suited undertaker, “He was my brother and I would carry him on my back if I had to”.

It seemed a moment of deep sadness. The words showed a depth of feeling he had previously masked, expressing a grief but also a regret. In former times he and his brother might have exchanged hard words. The man himself would die on Christmas Day that year; a call from a ward sister in the local hospital informed me of his death and asked if I wished to go to inform the elderly sister, the sole surviving member of the family, or if the hospital should call the police and ask them to make the call. Sitting with the lady in the fading light of a mid-winter afternoon, heavy heartedness would not have described the moment.

The man had been an enduring lesson in the need to say things while they can be said because the day might come when you can no longer say them. There is no point in being able to say that one would carry a coffin alone when the person is dead and inside it. There is no point in reciting all the words one would have said if the ears that might have heard them are now dead to everything.

Someone once suggested that each day should be lived as if it were the last, perhaps each conversation should be governed by the thought that there is always a possibility that one might never again see the person to whom one is talking. Perhaps in the ordinary stuff of everyday life, there are no words other than the ordinary ones necessary, but for family members, close friends, wouldn’t exchanges be very different if we were mindful that there might not be any more?