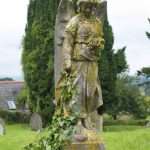 A telephone call brought an invitation to attend a Mass for the departed members of a local sports club – it is November, the month of the dead, such occasions are frequent. Has remembrance of the dead always been so much part of Irish life? Has there always been such acknowledgement by the entire community?

In England, in primary school days, it is hard to remember death being mentioned.

In junior class at our primary school, we would read of the travels of Saint Paul. His final journey includes a stop at the Three Taverns; a journey recorded on a map in the Bibles from which we would read with Miss Rabbage. “The Three Taverns” had a reassuring tone to the ears of a small boy at a tiny country primary school in the West of England. “The Three Taverns” conjured up pictures of flat-cap wearing, ruddy faced farmers in old tweed jackets and corduroy trousers in the town on market day. It had about it a sense of the safe and secure, not a sense of Paul’s impending fate..

Did Miss Rabbage not explain that Paul’s journey to Rome would lead to his death? I am sure she did; but there is no recall of it.

Perhaps it is part of the genius of childhood to see time as a series of discrete moments rather than as a continuous process. Memories come back as individual, self-contained entities; often without any narrative to link them together.

Think about memories of summer holidays in those youthful years: the pictures are often vivid. How many memories are there of the spring that preceded those summer experiences or of the autumn that followed?

Perhaps one of the reasons that children often have little or no sense of death is that time is the experience of the here and now, there is no sense of time as a process leading to an inexorable end. Tom Stoppard’s character Rosencrantz asks:

Whatever became of the moment when one first knew about death? There must have been one, a moment, in childhood when it first occurred to you that you don’t go on for ever. It must have been shattering – stamped into one’s memory. And yet I can’t remember it. It never occurred to me at all. What does one make of that? We must be born with an intuition of mortality. Before we know the words for it, before we know that there are words, out we come, bloodied and squalling with the knowledge that for all the compasses in the world, there’s only one direction, and time is its only measure.

Is he right? Is there an intuitive knowledge of death? If so, why do The Three Taverns have an enduring happy place in my memories and the ensuing death of Paul have no place at all?