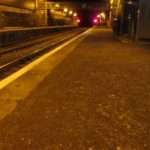 Was there a definitive pronunciation of schedule? Did saying it one way or the other mark one out? Was it a shibboleth, like ‘aitch’ and ‘haitch’? I didn’t know. “I say ‘shed-ule’, but that might be because I’m English”.

Thirty years must have seemed ancient history to the twelve year old inquirer; there were no further questions.

Hospital calls in Dublin took up the afternoon. By 4.30 pm the traffic was crawling. The thought of crossing the city to reach the road west was uninviting. Turning south, progress was just as slow. Reaching Co Wicklow, the road through the mountains offered an escape from tail lights: it was then the idea occurred, Rathdrum.

A moment in Rathdrum in 1981 contributed to being in an Irish classroom.

In the November darkness, the station seemed to have been missed. Pulling up on the far side of the town to check a road sign, there was a finger post to the left, “Train Station”. It was not where it had been in memories. Parking and crossing a large car park, there was then a footpath which ended at a main road. It was one of those, ‘If I was going there, I wouldn’t be starting from here’ moments. Another quarter a mile or so down the road, there was a turning to the right, the station tucked away deep in a valley. It had not changed.

Armed with fifteen day unlimited travel tickets, we had picked destinations at random. Somewhere there was something about a place called “Meeting of the Waters”, it seemed as good a place as any. A train took us through the southern suburbs and deep into the Wicklow countryside. We left the train at Rathdrum station, it was not promising.

Walking into the town, Kraft cheese slices, fresh bread and cartons of milk were bought in a shop. Setting off, we found a wooded river bank, but never found the promised confluence. Lunch was eaten in the company of a small dog who recognized twenty year old Englishmen as canine friendly.

There being not much else by way of diversion, we walked back to the station for the Dublin train. Standing on the platform, there occurred the moment that created the indelible impression that this was a country in which one could live.

As the train drawn by a big orange and black locomotive approached the platform, a woman stooped to pick up her luggage. A plastic carrier bag split and books tumbled out, a handful of them falling beneath the train. “Oh no, those are library books”.

The railwayman at the station walked up to the driver’s cab and had a word. The train reversed out of the station. The railwayman jumped down onto the tracks and gathered up the books and, climbing back onto the platform, handed them back to the woman. A few moments later, the train returned and we boarded it. Timetables and the usual running of a railway were secondary to the woman’s upset.

In the thirty-two years since that August day, there have been plenty of moments when one might have wished people had greater regard for rules; tribunals and national bankruptcy might have been avoided, but books on the line played a part in being a primary school wondering about how to say “schedule”.