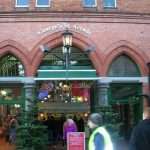 One month, now, until the hundredth Christmas since Robert Tressell’s “The Ragged Trousered Philanthropists“ was published in 1914. It is a comfortable read now, a century on from the exploitation that Tressell (real name Noonan) described; “a classic of working-class literature” says one commentator.

Tressell died of tuberculosis at the age of 41, three years before his book was published – he would have needed to have lived at least thirty years more to see the Welfare State bring some of the changes for which he might have hoped.

The characters in the story struggle for a better deal for working people. George, one of the workers, one who speaks about a different world being possible, turns out to come from an affluent background. At the conclusion of the story, he is able to depart for Christmas leaving his work mate Owen with what, in Edwardian times was a huge sum of money:

`Enclosed you will find two bank-notes, one for ten pounds and the other for five. The first I beg you will accept from me for yourself in the same spirit that I offer it, and as I would accept it from you if our positions were reversed. If I were in need, I know that you would willingly share with me whatever you had and I could not hurt you by refusing. The other note I want you to change tomorrow morning. Give three pounds of it to Mrs Linden and the remainder to Bert White’s mother.

Wishing you all a happy Xmas and hoping to find you well and eager for the fray when I come back in the spring,

`Yours for the cause,
`George Barrington.’

Owen read it over two or three times before he could properly understand it and then, without a word of comment – for he could not have spoken at that moment to save his life – he passed it to Nora, who felt, as she read it in her turn, as if a great burden had been lifted from her heart. All the undefined terror of the future faded away as she thought of all this small piece of paper made possible.

It is an ending that brings light into an otherwise dark scenario; one almost feels Nora’s sense of relief – £10 would change their Christmas.

It is an odd ending. After chapters and chapters of campaigning and analysis; the only actual bright moment comes from an act of individual charity. If Tressell had not introduced an unexpected twist in the tale, it would have been unremitting gloom.

Reflecting on Tressell’s work, I wondered how many people there will be this Christmas for whom there will be no George Barrington; how many will struggle with unemployment, rising bills, mortgage arrears, repossession orders, financial oblivion?

Tressell would despair that, a century on, things haven’t much changed.