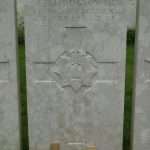 “We turn to Christ anew who hear his call today, his way to walk, his will pursue, his word obey.” We can think of turning, of hearing, of walking, but what does it mean to “obey”? Does our discipline in living the Christian life match the discipline we meet elsewhere?

Stories of the obedience of those who served in the armed forces are stories which for me are always very powerful. Coming from the West Country, having gone to school in Devon, one of the most moving places on the Western Front, for me, is the Devonshire Cemetery. The mortal remains of one hundred and sixty West Countrymen lie beside a copse of trees amidst the rolling grain fields of the Somme, among them Captain Duncan Lennox Martin.

Shortly before the Battle of the Somme, Captain Lennox Martin had gone on leave; he took with him a large scale map of the area his men would attack. Being an artist, he made a model of the battlefield. It was the model that convinced him about what was going to happen: when his men came over a rise by some trees called Mansell Copse, they would be cut down by fire from a machine gun in a cemetery that overlooked the ground. Returning to his trench, he told his superior officers what he believed would happen. Nothing in the plan was changed.

At 7.30 am, on 1st July 1916, what did he say as the attack began, as he realized his prediction would be fulfilled? What thoughts went through his mind, knowing that he and his men were going to be cut down by machine gun fire within yards of their trench? When he looked at the faces of the men of his company, some of them no more than boys, how did he try to maintain morale? He and his men died at the exact spot he had predicted.

With which officers had he shared his thoughts? Lieutenant William Noel Hodgson seemed aware of the fate that awaited. On 29th June, Hodgson, the son of the Bishop of Saint Edmundsbury and Ipswich, a man whose faith endured the horrors of the Western Front, wrote a poem called “Before Action”. It was a prayer for the courage to face the battle that was to come. The third and final stanza of the poem says:

He seems as certain as Duncan Lennox Martin of what was about to happen. What thoughts had he when the awful moment came? He was killed by a single bullet through the neck, fired from the same gun that had killed his comrades.

And, what was it all for? By July 1916, did anyone really believe that there was anything good or noble left in war? As generations of soldiers have died, they died for their friends. If we were looking for an answer to the question: what does it mean to obey? If we stood in that cemetery and looked at those headstones, we would realize what obedience could mean.

“His word obey”, we sing and how far would we go to obey his word? When we turn to Scripture obedience does not come with limits; Jesus does not say “do what suits you”, or “it’s all right to opt out if you feel unhappy”.

We see in Saint John Chapter 6 Verse 66 what happens when people are challenged about their faith. “Because of this many of his disciples turned back and no longer went about with him”, writes Saint John.

When we turn to Saint John Chapter 21, we see Peter being told by Jesus of what obedience will mean, in Verses 18 and 19, we read, “Very truly, I tell you, when you were younger, you used to fasten your own belt and to go wherever you wished. But when you grow old, you will stretch out your hands, and someone else will fasten a belt around you and take you where you do not wish to go.’ (He said this to indicate the kind of death by which he would glorify God.) After this he said to him, ‘Follow me.’

Peter is understandably concerned about why he is singled out, in Verse 21, Peter sees John and he asks Jesus, “Lord, what about him?”

Jesus responds in stern terms in verse 22, “If it is my will that he remain until I come, what is that to you? Follow me!”

Why has Peter asked the question? Because he has realized that glorifying God demands the ultimate obedience. But it is this obedience that will bring glory to God. People’s idea of God is shaped by the commitment of his people; by their willingness to obey his word. How often do we see a discipline in Christian life that would match the discipline in military life?

Saint Paul does not shy away from using the idea of military discipline when he is talking about our obedience to Jesus. He talks about disciples as soldiers. In the Letter to the Philippians Chapter 2 Verse 25, he writes, “Still, I think it necessary to send to you Epaphroditus—my brother and co-worker and fellow-soldier”; in the Second Letter to Timothy Chapter 2 Verse 3, he urges his readers, “Share in suffering like a good soldier of Christ Jesus”. Being a disciple requires putting on armour. In the Letter to the Romans Chapter 13 Verse 12, Saint Paul says, “Let us then lay aside the works of darkness and put on the armour of light” and in the Letter to the Ephesians Chapter 6, he instructs Christians to put on “the whole armour of God”.

In his First Letter Saint John outlines the importance of our obedience. In verse 3-5 of Chapter 2, John writes, “ Now by this we may be sure that we know him, if we obey his commandments. Whoever says, ‘I have come to know him’, but does not obey his commandments, is a liar, and in such a person the truth does not exist; but whoever obeys his word, truly in this person the love of God has reached perfection”.

John’s words are a profound statement about the importance of obedience. To realize that it is in our obedience to God that God’s love finds perfection means we should take discipline seriously. Too often Christians sit lightly to obedience, taking the attitude that we are saved by grace and need not be concerned by Godly lives.

Peter is to glorify God by dying for his faith in Jesus; each of us can glorify God through our own obedience.

We should never underestimate the power of obedience to witness to what we believe; to bring glory to God.

The life and discipline of Henry Ernest Hardy, better known as Father Andrew, was to have a profound impact upon a writer. With James Adderley, a Church of England priest who had who had devoted his life to the poor of the East End of London, Hardy founded a Franciscan Order within the Church of England. Known as the Society of the Divine Compassion, in January 1894. It was an order founded on obedience, Father Andrew’s intention was to be, “a community of priests, deacons, and communicant laymen, banded together in a common life of poverty, chastity, and obedience for the glory of our Lord and Saviour Jesus Christ and the benefit of His Holy Catholic Church, to worship Him and to work for Him and all mankind, especially the poor and suffering, in imitation of the Divine Master, seeking the help of one another in thus obeying Him”.

Father Andrew spent more than fifty years in ministering to the poor. The obedience and discipline of Father Andrew and his community affected thousands of his lives, including, decades later, the writer and columnist A.N. Wilson.

Wilson was not born until four years after Father Andrew died. He became an atheist in the 1980s, and, only slowly returned to Christian faith. He describes Father Andrew as a “priest who made sense of religion” saying of his copy of The Life and Letters of Father Andrew, “I sometimes think that if a fire broke out in my house, and I could take only one book, it would be this. When one has felt most inclined to chuck religion, for all the usual reasons, this is the book that has made a total break impossible. It is a record of “the real thing”.