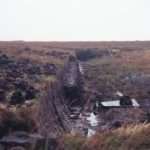 A Limerick man, the doctor had a directness of a Munster forward going for the line. “How are you keeping?” he asked.

“I’m fine. I don’t much like this time of year, frosty evenings with turf smoke hanging in the air; no wind to blow it away. If I step out into the street, I can feel turf smoke in my lungs”.

“But it’s a sweet smell”, he objected. “Seven or eight o’clock on a winter’s evening and the air is filled with its scent. It’s very Irish”.

Turf smoke has an unmistakeable scent, a whiff of it can bring memories long past tumbling into the consciousness.

Many of those who grew up in rural Ireland could tell stories from childhood years onwards of summer days spent saving the turf. Older members of the community will recount the use of the slane, the sharp-edged spade used in cutting turf by hand. For years to come, there will be memories of 2012, when the rain fell so much that the turf cut on some bogs simply dissolved back into the ground from which it had come. 2013 has been a kind year, a year to remember, a year that prompted one farmer to comment that the turf is “as dry and hard as coal”. The sheds and the barns are well-filled.

As someone whose only venture among turf was to pick bog cotton on a summer’s day, turf has not, for me, the deep place in family history it has for the doctor. If the winter well being of a community depended on dry days and trailers returning laden, then the aroma of smoke on a December evening will stir thoughts of tired adults and fireside conversations.

The turf smoke hanging in the still air may not be good for the respiratory system, but it never fails to conjure visions of low ceilinged cottages with chairs drawn close to the warmth, and pubs filled with the sound of fiddle music, and a sense of time stopped all being well.

A late summer’s evening in 1981 appears briefly among the slideshow of scenes passing through the mind. A brief image of the last glowing embers in the fireplace of a youth hostel on Valentia Island in Co. Kerry; sitting with two French girls who spoke of their hopes of the new administration of President Francois Mitterand.

Their hopes of a new France did not materialize, yet if they returned to this country today the scent of turf smoke remains, and with it an Ireland of mountains and harbours, and gnarled hands and strong arms, and laughter and smiles, and doctors who think smoke is not such a bad thing.