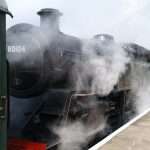 Captain Mainwaring ran to Walmington-on-Sea station to bid farewell to Fiona Gray in Dad’s Army’s nod to Brief Encounter, broadcast on Radio 4 Extra. There was a pathos in the moment. This was a thirty minute radio comedy, not the cinematic dramatic denouement of the relationship between Laura Jesson and Dr Alex Harvey. This was Arthur Lowe and Carmen Silvera, not Trevor Howard and Celia Johnson. Yet the snatched moments as the train prepared to depart for London had an odd poignancy.

Perhaps only railways have that power; a sense of both an immediacy, not present at an airport boarding gate nor at a ferry port barrier, and a sense of an immediate fate beyond one’s control, not present when someone steps into a car. Railways are atmospheric in a way that planes and boats and cars are not. (Perhaps buses have immediacy and uncontrollability, but whoever regarded buses as possessing any quality that might be thought poetic?)

Yes. I remember Adlestrop—
The name, because one afternoon
Of heat the express-train drew up there
Unwontedly. It was late June.

The steam hissed. Someone cleared his throat.
No one left and no one came
On the bare platform. What I saw
Was Adlestrop—only the name

And willows, willow-herb, and grass,
And meadowsweet, and haycocks dry,
No whit less still and lonely fair
Than the high cloudlets in the sky.

And for that minute a blackbird sang
Close by, and round him, mistier,
Farther and farther, all the birds
Of Oxfordshire and Gloucestershire.

Thomas’ poem always seemed the most evocative sixteen lines ever written. Anyone sitting on a train at a branchline station on a summer’s day will be there beside Thomas in that railway compartment. Perhaps the afternoon heat had within it a sense of the gathering storm around as Europe slowly sank into hell later in that summer of 1914.

Perhaps such a poem would only have been possible in the age of steam, perhaps, had railways begun in a diesel age, the romance they gathered around them would never have been possible. Perhaps, though, places have their own atmosphere.

One afternoon in May of 1980, I rode a stopping train from Brighton to Portsmouth. It was a warm afternoon as it drew into the station at Portslade. Used to anagrams from days of long Sunday services at a Brethren school, when time was passed by making as many words as possible from “salvation” or “teacher”, or whatever words that were being used, Portslade was easy to rearrange – this anonymous south coast railway station was an anagram of Adlestrop.

Thomas would have not have found the inspiration of rural Gloucestershire, but the stillness of that May afternoon still lingers in the memory. The train was a diesel multiple unit, a string of carriages without a corridor. Doors were opened by sliding down the window and using the external handle.

Perhaps two or three people stepped off the train, which seemed to pause overly long, maybe making way for something of greater speed, some service of greater importance. The sounds of doors being closed, each with a deep thud, broke the silence of the afternoon, disturbing a moment’s reverie in a troubled summer. The shrillness of the guard’s whistle brought back consciousness of the journey as the train stuttered tentatively on its way.

Nothing romantic on a diesel stopping train, it only lingers in the memory because of Adlestrop, but who knew what greetings and farewells had been shared on that platform? Who knew what journeys had begun and what journeys had ended? Who knew what people looked at the sign for Portslade and recalled fond or far off memories? Perhaps the reality of their world was more like that that of George Mainwaring and Fiona Gray than that of Alex Harvey and Laura Jesson, but isn’t everyone entitled to their own special moment?