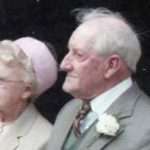 Grandad died in March 1991, he would have been a hundred years old today. His soft words and gentle smile remain clear in the memory, together with his capacity for work and his enjoyment of silence

He was a farmer behind his times. He farmed in a prosperous part of the country, but he was happy in doing things in the way he had always done them. In the days before having to go to school, I remember sitting on the back of the old carthorse, Dinah, as she pulled the hoe up and down between the rows of mangold wurzels. Harvest time was no more modern. The binder, pulled by a grey Massey Ferguson tractor, would go slowly up and down through fields of wheat. The sheaves would be put into stooks until they were gathered on a trailer and taken back to the barn.It always fascinated me how he could bind sheaves together with twists of straw when the binder twine broke – it never worked when I tried.

He was a master of recycling before the word was invented. Everything was stored away, every piece of twine, every nut, screw and bolt, every box, every sack, nothing was wasted; nothing was disposed of without thought. His neighbouring farmers were as frugal in their ways; every bit of machinery was fixed and re-fixed and coaxed along years after its reasonable life expectancy.There was no money to pay for new things and no-one would have contemplated going into debt, if it couldn’t be paid for today, it couldn’t be paid for tomorrow.

The farming life was hard and unrelenting, I remember him with an old coat on, tied with string around the middle, with a hurricane lamp in one hand, and a pitchfork holding a bale of hay held over his shoulder with the other hand, heading out into the rain and mud on a Christmas Day evening when the rest of the country was sitting down to watch Morecambe and Wise. Not once did I ever hear him complain, it was a life lived in a community where hardships were shared and where there was a common understanding of what daily life was about.

His capacity for work was matched by an ability to be quiet. Sitting in his farmhouse kitchen on a January afternoon last year, I felt a momentary desire to establish some tangible link with the past. Leaning back against a heater that had been there since the early-70s and drinking tea from cups and saucers, for one moment the years slipped away and he was back in his usual seat at the kitchen table staring out into the evening light.

He would sit on after his evening meal; perhaps he was dog tired after a day on the farm, perhaps he just liked to sit and ponder the world over the top of the china teacup in which my grandmother would always serve tea. He would stare fixedly out through the window to the garden and the orchard beyond. Passing the window would barely stir him from his reveries; his contemplations seemed deep and detached.

Staring, later that day, across a Somerset landscape, at the brilliant colours of a frosty January sunset, a desire for timelessness seemed not such a bad thing. Of course, if Einstein was right in his understanding of time happening all at once, then my grandfather was enjoying his tea as we sat there on a January afternoon and it was good to have tea together.

When he died in 1991, he was buried a sheaf of wheat was placed on his coffin – a sign of his lifelong work as a farmer; a sign that he had been gathered in like wheat at the end of the summer; a sign that just as the wheat sown in the ground springs up in new life, so we believe that those who are buried will rise again from the dead.