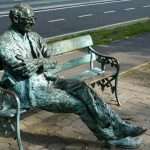 Going to the day centre three days a week would not seem such a bad prospect, would it? Being collected by a bus at one’s door and being taken to somewhere warm and bright and inviting where tea and coffee wait and where there will be a good lunch and where the people are friendly. There would be many worse ways of passing a day, of course, there would.

Having spent years urging people, who might be alone much of the time, or who might have little opportunity of going out, or who might not be inclined to cook for themselves, to avail of such opportunities, a less than enthusiastic attitude would be hypocritical. But driving a back road as the clock showed eleven minutes after five and another winter solstice passed, there was a momentary shiver down the spine, what might the future hold? Would I really want to get on a bus at ten o’clock in the morning and sit looking out of the window as the journey took us to another day of smiles and activities?

Women are much better at these things: drinking tea and laughing together, chatting over lunch, doing art and craft activities, sitting and sharing reminiscences, singing, even.

Men’s aversion to such prospects is partly accommodated by lower life expectancy. Isn’t it grand, boys, to be dead? as Liam Clancy might have commented. Still, what if one lived to the age when the social worker called, and sat drinking tea in the sitting room, and said the bus would be arriving next Monday morning and to be sure to call the centre if unable to come that day? Would there be courage enough to say to the bright young woman sat opposite that one was grateful for her concern, and that one was sure it was an excellent place, and that it was reassuring to know that such fine facilities existed, and that there might come a day when one would be glad to accept the opportunity, but that the time was not now?

On the road ahead, a twenty year old jeep rolled along at barely twenty miles an hour. The driver, silhouetted against the lights of an oncoming vehicle, was a flat capped man of advancing years. His right elbow leant against the driver’s door, he seemed content with his sedate progress, unconcerned to arrive anywhere very quickly.  Perhaps an old jeep was the pathway to independence, to be so busy out and about, that there would be no time for going to a day centre? To be out so much that the conversation could not arise. To pass the bus along the road and wave cheerily at the driver.

Of course, the day centre is excellent, an asset to the whole community, a great place, and offers of places should be accepted – it’s just that I wouldn’t be able to attend.