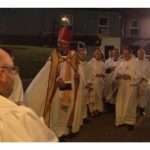 So the robes are to go? The Church of England may set aside rules requiring clergy to look like clergy; middle aged men wearing open necked shirts and jeans will become the order of the day. Parish churches will come to resemble the ninety-nine brands of evangelical church already on offer, each of them failing to attract more than a tiny percentage of the population.

Why doesn’t someone stop and ask where the church is strong? The Church of England, at times, seems lacking in numeracy skills. Which is stronger twenty people in a community of four hundred or two hundred people in a community of twenty thousand? The Church seems to have been beguiled by the thought of “big” numbers, even where those numbers are relatively far weaker. Fill the church with leaders known by affected diminutives of proper names, who talk in a language peculiar to evangelical Christians, who are surrounded by balding contemporaries and thirty-year old followers, and one will quickly clear the church of all those troublesome older people and prepare the ground for a new way of doing things.

Except that the new way is not new, it has been around for years. There is hardly a town without a place of worship where they play guitars and drums and sing songs whose lyrics are projected on a big screen – and it, while it has worked for those present, it has not worked for the wider community. If it had worked, those places would be so attractive to the general population, and so filled with new members, that they would be moving to venues that would hold thousands.

The new(ish) way of doing things simply does not engage with communities in a way possible through the traditional churches. In her 2006 book Journeying Out: A New Approach to Christian Mission, Ann Morisy wrote, “The fact churches have been present in a community for decades, if not for centuries, counts for something. No other agency will have the voice and depth of history that the church represents, and the local church must harness and be allowed to harness, this asset wisely and generously because it cannot be easily replicated”. Morisy recognizes that only the traditional church can provide ceremonies apt for particular moments, incidents such as the Soham murders, in 2002, challenged the church to do what only it could “to give the community access to the church’s substantial repertoire of high symbols in order to provide succour in their intense distress”.

The paradox of the latest reported proposals is that it is a further step towards discarding the history and the symbols that are at the heart of the strength of an established Church. Throw away what makes it different, and it throws away its mission.