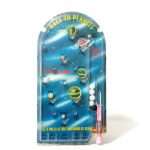 It was maybe 1967; much earlier, and the moment would have been beyond memory; much later, and the occasion would not have have assumed the aura it still possesses. My aunt, uncle and cousins were coming home on a visit – from Canada. In 1967, air travel was expensive, return visits by emigrants were rare. The occasion was such that it was deemed appropriate that we would all travel to London Airport to welcome them on their arrival. Trips to London Airport were almost as rare as flights across the Atlantic and the occasion was one approached with great excitement.

One moment remains vivid, standing at a barrier in the bright light of the terminal building, watching people appear from a corridor. My aunt and her family appeared, my aunt with styled dark hair and a brown fur coat with which she withstood the chill of Ontario snows; my cousins in check shirts and patterned sweaters, smart North American winter attire.

In Somerset of the 1960s there were still people living in the pre-fabricated houses that provided homes to many people after the Second World War. The gap in wealth between North America and the England we knew was wide and the gifts my aunt seemed extravagant; mine was a pinball game called “Race for the Planets”. It was a game that I still remember in teenage years, it seemed to capture the spirit of the times: affluence, optimism and a sense of mystery about what might lie out there, wherever “out there” might be.

To be honest, the game itself wasn’t very exciting, pulling the pin back to fire the balls didn’t demand much skill or interest, what was impressive was the quality with which it was made – it lasted years after other things had long disappeared – and the mystique of the planets.

1967 was at the heart of the Space Age, the Apollo missions had begun, two years later the first moon landing would take place. The planets could only be a short time away, the race would soon be with real rockets. Of course, it never happened; the planets seem further away now than they did in those pre-electronic days. A manned landing on Mars is no more than a remote prospect and inter-stellar travel is no more a realistic prospect than an episode of Star Trek.

Watching the moon appear in a clear January evening sky, the pinball game came to mind. A child’s capacity for optimism seemed more infinite than the space observable on a frosty Irish evening. 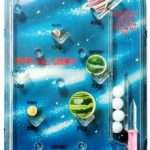