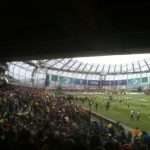 They will arrive in the coming days and their songs will fill the air: Welshmen, thousands of them to support their team playing Ireland at Lansdowne Road on Saturday. Their voices have been a presence in the memory for decades.

Growing up in Somerset in the West of England, rugby never entered the consciousness most of the year. It was an amateur game, without a great fan base that seemed dominated by public schools and Oxbridge. Across the Bristol Channel, it was different: rugby was the sport of working men, it went with images of the valleys and the sound of male voice choirs.

For a few weeks each year, names from the other side of the Severn Bridge would fill the commentary on the matches watched on our black and white television. There was a poetry even in the team sheet; JPR and JJ Williams, Gareth Edwards and Phil Bennett. In hushed tones there would be mention of the one who had been numbered amongst them, but played no more: Barry John.

One knew when the Welsh were doing well (and they always did well in those years), the sound from the television came like the words of a ballad: a soft telling of a story reaching a lively refrain as a red-shirted back once again crossed the line for a try.

It is extraordinary to think that orthopaedic surgeon Dr JPR Williams, a man who has been a legend for more than four decades is still not of retirement age; that those whose presence filled the cameras at the Arms Park on those early spring afternoons were not so much older than the teenagers who sat watching.

Perhaps the feeling that those encounters belonged to some other dimension; that those who stood and sang Land of my Fathers occupied a universe other than those who looked across at Barry Island on grey February mornings; was helped by the presence of Max Boyce. Boyce was like some minstrel from medieval times in his retelling of the heroic feats of the army he followed; even those at the sharp end of Boyce’s wit still smile. The subject of The Sunshine Home for Blind Irish Referees can look back forty years and still maintain he was right and Boyce was wrong.

The Welsh had always so much music.  A BBC Radio 4 programme on music and sport explored how much the singing meant, how much a team’s morale was changed by the sound of thousands of voices willing them onwards.

Perhaps it was the music that gave the rugby its poetic quality. It is hard to watch back now the old videos of those matches and not have the strains of Cwm Rhondda echoing around the back of the mind. Hopefully, on Saturday, the Irish team will restrict the Welsh fans to singing Sospan Fach and Hymns and Arias, because when the sound of Bread of Heaven begins to fill the ground, it is not hard to guess who is winning.