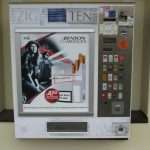 An attractive long-haired young woman wearing a hat, leather jacket and jeans; her fashionably dressed male companion, dark hair, dark beard, dark glasses; and, beside them, a packet of Benson and Hedges cigarettes: it could be an advertisement from the 1970s. Except the picture was taken yesterday, and it was taken not in a low income country susceptible to the images of Western marketing, but on the street of a fashionable resort in Austria.

Cigarettes in Austria are half the price of those in Ireland, are not hidden away in plain cabinets in shops, and are still advertised with the sort of imagery long forbidden here. If one accepted the logic of the Irish government, one would expect that “sexy” marketing, low prices and easy availability would lead to a high level of cigarette smoking in Austria. But the OECD figures simply do not support the Government’s line – cigarette smoking in Ireland stands at 29% as opposed to 23% in Austria. Despite its anti-smoking measures, Ireland has one of the highest levels of adult smokers in the European Union. Nor is there evidence that Ireland’s attempts at reducing smoking have enjoyed great success; while the average reduction in European Union countries between 2000 and 2010 was 16.3%, that achieved in Ireland was only 12.3%.

When it is apparent that countries like Austria pursue an entirely different policy and achieve better results, when the OECD statistics show that Ireland has not been successful in the path that it has followed, why does the Government persist with its policies? An HSE report published in February 2010 stated, “Overall rates for smoking were 33% in 1998, 27% in 2002 and now 29% in 2007”. In the OECD figures for 2010, the rate for smoking in Ireland was unchanged from 2007; despite a raft of measures, there had been no reduction in three years.

Cynics might observe that taxes introduced for health reasons have become very useful sources of income for governments. While the huge taxation of cigarettes has still left Ireland only below Greece and Bulgaria in the league table of adult smokers, it has brought billions into the Department of Finance. The Government can continue claiming that it is imposing increases in duties for ethical reasons, whilst being quietly confident of maintaining its revenues.

An inescapable fact of indirect taxes, taxes such as cigarette duties, is that they are regressive; they take no account of ability to pay, so bear down most heavily on the poorer members of the community. The HSE report acknowledges that levels of smoking are much higher among lower socio-economic groups.

The statistics from the OECD and the Department of Health show that not only are the anti-smoking measures failing, but they are taking more and more money from those who can least afford it. If the Government really wanted to reduce smoking, it would think about going about it in a different way, but maybe it has become overly fond of those revenues.