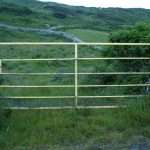 Picking up a book of memoirs to put it back into the shelves, it fell open at the title page, it included a photograph of a group of children, a young woman standing beside them. A woman who in her lifetime was so unobtrusive that it was a surprise to find her appearing in a picture at a front of a book.

The young woman pictured is now long dead; the man she would marry some years after the photograph was taken is also long dead.

He drove his old tractor until the end. Each morning he left the house and drove at a pedestrian pace to the farm. His daughter lived in the farmhouse and gave him his midday meal, each evening he pulled himself up into the cab of the tractor and drove home again.

The young woman who had become his wife was a quiet and homely woman, their long low cottage was always warm and welcoming.

He never attended church, he had been a member of some evangelical group in the past, but had long since lost any faith he may have had. She never missed, arriving Sunday by Sunday with a prayer book she hardly needed, for the variety of prayers in our little church was so limited that she must have known them all.

When they were both gone, there was a remaining air of mystery, nothing ever articulated, just odd comments, pieces of the jigsaw not quite fitting.

One family member was not like the others, even to a fellow barely in the place, there seemed a genetic mismatch. It was not something to ask about, anyway the odd one out lived a suburban life a distance away.

It was sometime later that the picture became clearer, a bachelor farmer from another parish had let fields in the parish to a local family for some time. When he died his fields were left to someone with whom he had no connection, no connection at all, the person who didn’t match the rest of the family, the one who had chosen suburbia over the deep rural community that had been home.

“Why would he make such a will?” I asked the tenant farmer who rented the fields. On reflection, it was a naive question.

Country people are sometimes good at not saying things.