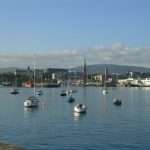 There is probably a clinical term for feeling excessive empathy towards a person, particularly towards a stranger of whom one knows nothing. Passing a shop premises which has its fourth different business in four years, there was an overwhelming sense of sadness at looking in the window and seeing it devoid of customers and the shopkeeper sat at the cashdesk and looking glum. It wasn’t even as though I could have gone in and bought something, his stock was the military and fantasy figures used in games played by teenage boys. Perhaps it had always been his dream to have such a shop; to have a business where people would gather each day and discuss the business of dwarves and elves and dragons and orcs, if so, it seemed even sadder that there was not a single potential customer in sight.

In south Co Dublin an area in which we lived for eleven years, a “Shop in Dun Laoghaire Day” was held yesterday. Dun Laoghaire is surrounded by some of the most affluent suburbs in Ireland, its economic decline arises not from deprivation, but from a change in shopping patterns, a shift to out of town centres, to malls filled with high street names, to online purchases. A once thriving town is now a shadow of itself, and a whole community suffers when choices are made not to put money back into local businesses. It is an experience familiar in many towns and cities throughout these islands: footfall reduces, streets become rundown, facilities close for want of use, and pleasant places becomes a ghost towns.

But we choose these things, we choose whether or not our businesses and our communities thrive.

Growing up in rural Somerset, in a village three miles from a bus stop, our remoteness did not prevent there being regular access to all we needed. There was a village shop and a post office. There was a milkman who called every day and a paper man who delivered six days a week. There was a mobile shop that called on a Monday evening and a baker who called on Tuesdays, Thursdays and Saturdays. There was a man from a hardware shop who sold things like paraffin and a fishmonger who called on Fridays. There were even two different ice cream vans, one calling on Fridays and one on Sundays. Slowly, the supermarkets took over; slowly money shifted from small businesses and local communities; slowly the familiar vans disappeared. The farmers’ markets have attempted to inject badly needed income back into local pockets, but only work if there is a change in culture.

People go to France an comment on how pleased they are to find towns and villages where high streets are still busy and where local produce and enterprise is still profitable. It is not a matter of chance, it is because the French go and spend their money in those shops. It is not because they have no alternative, the hypermarkets are huge, it is because they choose to shop local.

Whether its a single games shop, or a whole town, the more we choose to buy cheap, to buy bland, to buy online – the more the estate agents’ boards will appear and the more we kill our communities.