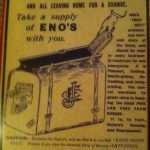 The Scaffold, the group that included Paul McCartney’s brother, Peter, and Roger McGough, who would become one of England’s leading poets, recorded Lily the Pink, a comedy song which would reach Number One in the charts at Christmas 1968. It captured the imagination of an eight year old listening to the radio at that distant Christmas time and almost five decades later it seems one of the most sensible songs ever written. The refrain goes:

Whilst the Nineteenth Century patent medicine, Lydia Pinkham’s Vegetable Compound, the inspiration for Lily the Pink, might have been efficacious for some complaints, the 1968 parody is a mocking of the charlatanism behind most of the patent remedies. Newspaper advertisements claimed wondrous properties for “medicines” that might be listed as appropriate for almost every imaginable human ailment. Sellers of such medicines became known as snake-oil salesmen, quack doctors. Cher’s song Gypsies, Tramps and Thieves includes the lines,

Papa would do whatever he could
preach a little gospel, sell a couple bottles of Doctor Good.

Reading the advertisements now, it is amusing, and, sometimes, confusing that people might have been so credulous. It was not just in the popular press that the advertisements appeared. Inside the front cover of the 1913 edition of Bradshaw’s Continental Railway Guide, not a book that would have circulated widely among the masses, there is an advertisement for Eno’s Fruit Salt.

To travellers and all leaving home for a change, take a supply of Eno’s with you.

Eno’s ‘Fruit Salt’ prevents any over-acid state of the blood, and should be kept in every bedroom in readiness for any emergency. It is Pleasant, Cooling, Health-giving, Refreshing, and invigorating. You cannot overstate its great value in keeping the blood PURE AND FREE FROM DISEASE.

It is, in fact, Nature’s Remedy, and Unsurpassed.

Any emergency? Keeping the blood pure and free from disease? Could educated, cultured and intelligent people have believed that “Fruit Salt” could heal septicaemia, toxaemia or leukaemia? We might laugh now at the credulity of those whose bathroom cabinets would have been stocked with such cures, but what of the snake-oil and quackery of our own times?

The faith-healers, the bone-setters, those with the cure; the alternative therapists, the practitioners who charge no fee but leave a “donation” box at the door; the people who still sell bottles of “Doctor Good” or whatever the 21st Century equivalent of “Fruit Salt” may be: each of them worthy of a Nineteen Century advertisement. The quacks are alive and well and no longer needing to sell from the back of a wagon. In fifty years’ time a new Roger McGough will be able to pen a new version of Lily the Pink.