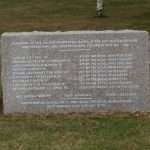 A hundred years ago this evening, 20th March 1914, General Sir Arthur Paget, commander in chief of the army in Ireland, sent a telegram to the War Office in London, advising them that officers at the Curragh, the main barracks in Ireland, would resign their commissions rather than go to the North to take action against the Ulster Volunteers.

OFFICER COMMANDING 5TH LANCERS STATES THAT ALL OFFICERS, EXCEPT TWO AND ONE DOUBTFUL, ARE RESIGNING THEIR COMMISSIONS TODAY. I MUCH FEAR SAME CONDITIONS IN THE 16TH LANCERS. FEAR MEN WILL REFUSE TO MOVE. REGRET TO REPORT BRIGADIER-GENERAL GOUGH AND FIFTY-SEVEN OFFICERS 3RD CAVALRY BRIGADE PREFER TO ACCEPT DISMISSAL IF ORDERED NORTH.

It was odd to think that the British army might have acted against Davey. Davey was one of the Volunteers who a month later, in April 1914, would receive a gun from among those that came into Larne. His gun was a German revolver though many received rifles. Local members of the Ulster Volunteer Force were told to go to a particular crossroads at a particular time. The guns were handed out and they were told to go home and hide them.

Davey would have just pushed his revolver inside his coat, but where would you have tied a rifle to conceal it from passing strangers while you rode along on a bicycle? Policemen must have turned blind eyes. Had the army come North, it was not just the Volunteers they would have faced.

Davey had been a member of a battalion that drilled in the grounds of Ballykilbeg House. The drilling was something very public, to the extent that photographs were taken of the battalion standing in front of the fine Georgian building.

Reminiscing one day a couple of years after Davey’s death in 1990, his wife Mary took out a photograph of the battalion. While Mary made the customary cup of tea and tray of sandwiches, I scanned the faces in the photograph. Rows of serious young men, unaware of the shadow that overhung the lives of everyone in Europe. In the back row, at one point, the photographer had attempted to brush a figure out of the picture. His attempts had not been very successful, for a clergyman in a broad-brimmed black hat was clearly visible.

Mary came back in with the tea. “Who is the clergyman in the back row?” I asked.

Mary took the photograph and held it up to the light. “Oh dear”, she said, “that was Canon Pooler. He shouldn’t have been there”. Eighty years later and Mary had felt the need to apologize that a local clergyman had been in the company of the Ulster Volunteer Force.

I wondered about her reaction. These young men would volunteer in their thousands to fight for the country that was legislating to be rid of them. In July 1916, thousands of them would be cut down at the Somme. No-one would have asked questions if Canon Pooler had been standing with them in France. Because a Government that cared little for them had declared war on a country about which they knew little, they were seen as different people.

Why did so many people like Davey,  a quiet farm labourer with no strong views, join the UVF? Why did so many working class Protestants feel alienated by political moves in pre-1914 Ireland? If the Curragh “Mutiny” had not taken place on this night in 1914, what would have happened?