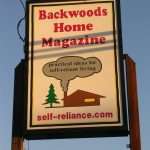 It was one of those adventure books that caught the imagination of an eleven or twelve year old boy, the heroes, teenage boys themselves, sought safety and refuge deep in the heart of an English forest. The story never suggested where the forest might be, but the boys are assisted by a charcoal maker who lives a self-sufficient life, his home a shack in a clearing.

The title is long gone from the memory and searching for the book on the Internet with such scant details has proved a futile exercise. The plot was probably fairly thin, the attraction was not any storyline, but in the descriptions of the boys learning how to survive. It seemed possible that such a story might be so, that it was within the bounds of imagination that a pair of teenage boys might learn self-sufficiency.

Isolation and survival have remained matters of fascination since reading the pages of that book.

Is it possible to really hide anywhere, now? Perhaps in remote, sparsely populated countries it might still be feasible to disappear, for a time at least, but a stranger would be conspicuous in communities with view visitors and would find food and shelter would be difficult to find in an unfamiliar environment. In most of Western Europe, it is hard to imagine it would be possible for someone to live somewhere for more than a few days before being noticed. Like hiding a pebble on a beach, it is much easier for a person to disappear among the crowds of a city than deep in rural areas; perhaps the boys would have been better advised to have lurked in the streets of London than have gone into the depths of a forest.

Surviving by living off the land now seems a prospect even more remote than being able to disappear. Even a cut in the electricity supply leaves most of us adrift and not knowing how to cope; the suggestion that we might go deep into a forest, with nothing more than the clothes we wear and a pen knife in our pocket, and become self-sufficient for a prolonged period, would seem laughable. If you were like me, survival would probably depend upon seizing fruit from greengrocers’ stalls and pints of milk from doorsteps rather than snaring, skinning and cooking rabbits.

Walking through the Oregon town of Gold Beach on a July evening three years ago, we happened upon the offices of Backwoods Home Magazine: three years later, the philosophy of radical self-reliance they promote remains fascinating. The embracing of a firearms culture and the individualist libertarianism are far removed from the anaemic liberalism of a 1970s English education, but the notions of responsible and sustainable living seem not so far from the sort of thing we might teach in church – and, were I once more an eleven or twelve year old boy, I might really learn how the boys in the story might really have survived.