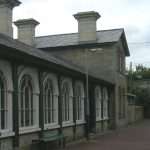 Of course, the dream could never have come true: one doesn’t begin a railway career in one’s mid-50s, and, anyway, it is years, decades even, since there was a stationmaster in Roscrea.

My first visit to Ireland, at the end of August 1981, revolved around public transport: British Rail to Holyhead; the Sealink ferry through the night to Dun Laoghaire; and then CIE trains and buses. We bought a fifteen day bus and train pass from an office at the end of the platform at Pearse Station. The ticket clerk eyed us suspiciously, “Do you know how much these tickets are?”

We handed £104 through the window to him. The Irish Punt was at about 77p Sterling, so the tickets weren’t as expensive as they sounded; nevertheless, the thought of two twenty year old Englishmen handing over a hundred quid seemed not to bring out the best in him.

The tickets came with a railway timetable; something that was to provide hours of delight in the years to come. Dozens of imaginary journeys were made from stations we had not visited to places with interesting names. It was hard to imagine that thirty years later there would be far more stations on the network than there were in the turbulent year of 1981.

The town of Roscrea in Co Tipperary always seemed an attractive destination. A Catholic nun with whom I had worked for the previous year had moved to live and work in the town. There seemed to be four trains a day each way on the branch line that passed through the town’s station. When asked my career aspirations for years afterwards, I answered, “To be the stationmaster in Roscrea”. It would have been a good achievement; railways always had a poetry about them, they inspired thoughts and imaginings that will never be possible with motorways.

Sitting in Limerick station one afternoon some twenty years or more later, the departure boards announced that some trains went via Ballybrophy. It sounded a place from a storybook; it seemed to be the place where the branch line joined the main line: coming from Dublin, one changed at Ballybrophy for Roscrea, Cloughjordan, Nenagh, Birdhill, and Castleconnell, before reraching Limerick.

Moving to work in Co Laois, one of the special delights was to have Ballybrophy station close by. It is a place of former glories; beautiful buildings and trackside structures from the age of steam. Ballybrophy station cannot be passed now without pausing to look over the bridge and trying to imagine all the different people who might have travelled the line – but now it is threatened. Minister Leo Varadkar is threatening railway closures, not without reason, the Irish Times reports, “It is understood Iarnród Éireann is particularly concerned about passenger numbers on the Ballybrophy to Limerick line, the Western Rail Corridor from Limerick to Galway and the Limerick Junction to Waterford line, among others”.

A whole world of dreams will evaporate. Did the minister never want to be stationmaster somewhere?