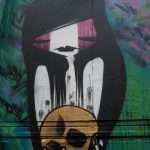 Lent fulfils its name as light lingers in the sky. A dairy herd grazes in a field on a hillside, their night time presence testifying to a sufficiency of grass in the pasture land. Banks of darkening grey cloud will likely prevent the threatened frost.

The play on the radio is about a couple who are told their long awaited baby will be stillborn – it is painful listening. Could such a script have been managed by someone without firsthand experience, but would someone who have been through such grief have written a play about it? Maybe. At the conclusion a helpline number is given; it seems an approach assumed to provide absolution for pain caused.

The play is followed by a discussion of a forthcoming production. One of those interviewed reflects on a theatre career, “I have always been involved in drama in some shape or form”.

Always involved in drama in shape or form? Hasn’t everyone? Isn’t daily life a drama more compelling than anything that comes from the keyboard of a playwright? Reality does not conform to the parameters of a script, though the script is sometimes preferred. In Tom Stoppard’s “Rosencrantz and Guildenstern are Dead”, Guildenstern protests against the unreality of the depiction of death in plays and the Player responds:

GUIL (fear, derision): Actors! The mechanics of cheap melodrama! That isn’t death! (More quietly.) You scream and choke and sink to your knees, but it doesn’t bring death home to anyone-it doesn’t catch them unawares and start the whisper in their skulls that says-“One day you are going to die.” (He straightens up.) You die so many times; how can you expect them to believe in your death?
PLAYER: On the contrary, it’s the only kind they do believe. They’re conditioned to it. I had an actor once who was condemned to hang for stealing a sheep-or a lamb, I forget which-so I got permission to have him hanged in the middle of a play-had to change the plot a bit but I thought it would be effective, you know-and you wouldn’t believe it, he just wasn’t convincing! It was impossible to suspend one’s, disbelief-and what with the audience jeering and throwing peanuts, the whole thing was a disaster!-he did nothing but cry all the time-right out of character-just stood there and cried… Never again.

That’s the problem with reality, you just stand there and cry: there is no reaching the end of the script and returning to a situation where everyone lives happily ever after. Things do not change because the play has come to an end.

The darkening sky brings the realization that an afternoon driving potholed roads means only one headlight is working. If there is a problem with everyday drama, whatever its shape or form, it is that it is mostly dull; though better it be dull than painful.