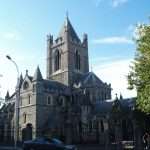 In 1870, when the Church of Ireland ceased to be the Established Church in Ireland, concerns were expressed that the future of the church might now lay in the hands of men who were better able to judge livestock. The capacity, among Church of Ireland members, to judge livestock might have diminished in the intervening century and a half, but the future of the church still lies in the hands of men – and will continue to do so.

The process of appointing clergy to parishes revolves around a group of four people called parochial nominators. Each parish has its own set of nominators, once every three years, at the annual general meeting of the parish,they are elected for a three year term. It is their task to meet with suitable candidates and then to attend a meeting with representatives from the diocese to form a board of nomination; to be appointed to a parish, you must secure seven of the ten votes at the board meeting.

In the months after the appointment of the Church of Ireland’s first woman bishop last autumn, it would have seemed not unreasonable that there would be a commitment to women’s representation among the nominators of each parish. Nothing radical was being proposed, no suggestion of gender parity, instead a modest reform asking that parishes elect at least one person of each gender so that parochial nominators be a better reflection of the life of the parish from which they come. A piece of legislation was introduced at today’s meeting of the General Synod, the Church of Ireland’s annual parliament that meets for three days each May, which, if passed, in practical terms would have meant the right of women to have at least one seat at a meeting of a board of nomination: the proposal was voted down, by 157 votes to 143.

The vote recalled,for me, a 1993 meeting in the drawing room of the Victorian rectory in which we lived, with four gentlemen from a conservative rural parish in Co Down, a parish for which I had applied. They were hardly the most talkative of people, but did appear to be listening as I talked about ministry in my own parishes; about the special occasions where our three churches would combine to generate large congregations; about our attempts to have worship rooted in the life of the farming community, about the importance of pastoral care in the scattered farmsteads. I thought it was not a bad piece of reflection.

At the end, I said, “I hope that makes sense. Perhaps you have some questions?”

At the end of the settee sat a man with an Old Testament name. He wore his dark Sunday suit and shiny black shoes. As he stretched out his legs, he revealed brilliant white socks with coloured stripes around the top. He looked at me and said, “Do you play bowls?”

“Do you play bowls? Our last Rector and his wife were great bowlers and great members of our bowling club: do you and your wife play bowls?”

It was the moment when the most useful thing to have said would have been, “Thank you for your time, gentlemen. I’m sure we now all have better things to be doing”.

The 1870 comment about livestock might have been unduly bitter, but perhaps, in part, anticipated white-stockinged men asking about bowls. A woman, at least, might have asked pastoral questions – and certainly would not have worn white socks with black shoes.