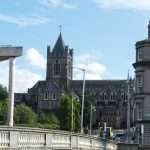 The unmistakable tones of Lance Corporal Jones would have been familiar to anyone who grew up with British sitcoms in the 1960s. Jones, a leading character in the series Dad’s Army would shout “Don’t panic! Don’t panic!” while running frenetically in every direction. Jones is an expression of the very human instinct to “do something”, even when there is little idea as to what the something is.

Prevented by pastoral commitments  from attending our church’s general synod (its annual conference), there is a realization that synod is a very Corporal Jones activity: bustling around, making a noise, appearing to “do something.” The synod will have received reports, passed resolutions, (and probably been a platform for candidates for the election of the next bishop of Limerick), but it will have made little difference to anyone outside its ranks. That it is considered important by church leaders is probably more indicative of what has been described as a “bias towards activity”, than a reflection of any tangible results it might have achieved.

Some years ago, John Authers,  writing in the Financial Times, reflected on turbulence in the stock markets and talked about this “bias towards activity.”  Falling share prices prompt panic selling and, often, further losses when the most sensible thing to do is to sit tight. Authers talks about the sense that we must “do something”.

An example from football, provided by James Montier of Société Générale, tells the story. When a goalkeeper tries to save a penalty, he almost invariably dives either to the right or the left. He will stay in the centre only 6.3 per cent of the time. However, the penalty taker is just as likely (28.7 per cent of the time) to blast the ball straight in front of him as to hit it to the right or left. Thus goalkeepers, to play the percentages, should stay where they are about a third of the time. They would make more saves. Why don’t they? Because it is more embarrassing to stand there and watch the ball hit the back of the net than to do something (such as dive to the right) and watch the ball hit the back of the net. The results are the same but those who tried to be active feel happier. This is universal. In baseball, batters often prefer to go down swinging, even when the percentages suggest their best bet is to leave the bat on their shoulders and see if they can force the pitcher into giving them a walk. Again, it is very embarrassing to strike out with the bat on your shoulder.

The church is affected by this bias. We feel we must be doing something, that unless we have numerous committees and write worthy reports, then people will think that we don’t care. We feel embarrassed to just stand our ground. Even at parish level, there is a tendency to regard frenetic activity as a sign of strength, when, in most other areas of our lives, frenetic activity is a sign of uncertainty.

Perhaps Authers’ piece should have been sent to synod members, but they would probably have been too busy to read it.