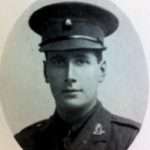 Plastic sleeves were bought for the books. Being published in the 1920s and having reached 2014 in a good state, it would have been a pity to have unnecessarily damaged them. “The History of the Ulster Division” and “With the Ulster Division and France,” they had once been the property of Tom Mahood, a private soldier from Co Down. The intention had been to take them to Thiepval last week for the commemoration of the Battle of the Somme on 1st July. Despite the careful preparation, they were left behind, and a piece of the jigsaw was missing.

Phoning Cecil to wish him a happy 98th birthday, I admitted that I had been at Thiepval and had remembered his namesake in the two minute silence, though hadn’t been able to remember his surname.

Cecil was born on 12th July 1916. The previous day a telegram had arrived advising the family of the death of Captain Cecil Ewart of C Company, 11th Battalion, Royal Irish Rifles, the South Antrim Volunteers. Captain Ewart’s company had gone into action on the morning of 1st July 1916 and he had disappeared in the conflict; his body was never found. Cecil Ewart’s name is among the 72,000 names on the arch at Thiepval, names of those who died in the killing fields of the Somme and who have no known grave. The newborn member of the family was named after the young officer whom they would never see again.

Annoyance came this evening when picking up “With the Ulster Division in France” and realizing that it was actually a memoir of the battalion with which Captain Ewart had served, complete with maps of the battlefield, and that, carrying it with me last week, I might have found the spot where C Company went “over the top” and have been able to tell Cecil that I had stood in the place that had been the last known whereabouts of the man whose name he bore, looked up the hill where his men had advanced.

The lazy response would have been to have made a mental note to take the book “next time” and, next time, to try to arrange a visit to Thiepval Wood, where Captain Ewart probably walked through the now preserved trenches, but when you have wished someone a happy 98th birthday, you realize that the “next times” may be fewer than before, and that opportunities should not be casually squandered.