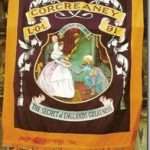 It is twenty years since I attended an Orange Order demonstration; I can still recall the evening of 12th July 1994.

With tired feet and sunburned foreheads and heads aching from being overdressed and dehydrated on a hot summer’s day: the three Orangemen sat and watched the video recording I had made of the proceedings of the day.

These were men whose organization has been compared to the Ku Klux Klan by liberal writers; whose beliefs have been vilified and pilloried around the world. Being a pint-drinking, football-following middle of the road Anglican, perhaps my senses were too dull to see what evil company I was keeping. All I could see was three men whose activities (that I thought were eccentric) had caused no offence to anybody and who tomorrow would be back working on the land.