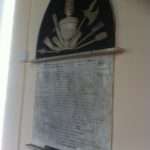 The script is small, faded and densely packed. Only due to the fact that there was half an hour to spare was there an opportunity to climb up into the pulpit to try to read it. For various reasons, it is baffling.

This monument is erected by Elizabeth and Jane Despard to the memory of their Brother
Lieut Colonel Despard of the Royal Fusiliers,
son of Capt P. Despard,
and of Laetitia Despard alias Croasdale deceased, who expired on 22nd of August 1813
at Vittoria of the wounds he received in the Battle of the Pyrenees,
whilst gallantly cheering his Men to Victory in the 4th Division of the British Army
under the command of Lieut. Genl. the Hon. Sir Lowry Cole
The first time Lieut Colonel Despard was on service was at the taking
of the Island of Martinique in 1809;
where he made himself conspicuous by being the first Man in Fort Bourbon,
and planting there the British Standard
He afterwards particularly distinguished himself in all the Campaigns in Spain and Portugal,
that Field Marshal the Marquis Wellington,
expressed his estimation of his Talents on several occasions
and he was twice honoured with the Brevet rank for his conduct in the Field
first in the Battle of Albuera, and next in the Battle of the Pyrenees,
where he received the fatal wound that terminated his life and glory together
As an officer he was brave generous and humane,
beloved and lamented by all ranks in the Army,
As a Man he possessed every quality that endears private life and fulfilled
every Relation with that exemplary fidelity which ever flows from a mind
touched by feeling and subdued by Religion
In him his Country lost a Protector
and his Relations the dearest object of their affections
yet for such sorrow there is consolation
“He is not dead but sleepeth”
his noble spirit ever ready to meet the will of his creator
lives immortal in the Regions of the just made perfect and his virtue
will survive as long as worth is lived
or Patriotism respected.

Lieutenant Colonel Despard is given no Christian name, just his rank and surname; his father has only an initial; yet Lieutenant General the Honourable Sir Lowry Cole has his rank, titles, and full name. The memorial tablet is on the wall of a church not built until 1860. Given that the man’s father is still alive, the tablet must predate the building by forty years; where was it previously? Perhaps on the wall of the previous building, but why, then, was it moved and not the other tablets affixed to the wall of the former church building? To whom is it addressed? It is on the wall of a building deep in rural Ireland, how many of the population in the early Nineteenth Century could have read the words, let alone understood them? Of those who read the memorial, how many would have had any idea where the places mentioned were? And who was the author? A fellow officer? A member of the family?

Two hundred years later, the prospects of answers are slim.