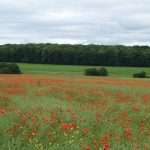 “While people are saying, ‘Peace and safety,’ destruction will come on them suddenly” 1Thessalonians 5:3

Winston Churchill is alleged to have once said that, “history is just one thing after another”. I was always troubled by that suggestion. I always liked to think that there was a pattern in history; that great events formed part of a sequence; that there were movements and tides that carried things inexorably along. Visiting the Western Front on an annual basis since 2009 and reading history books describing the unfolding events has more and more convinced me that Churchill was right, that history is just one thing after another, and that my imagination was very wide of the mark in thinking that there was a clear purpose.

When Paul says in the First Letter to the Thessalonians Chapter 5 Verse 1, “Now, brothers, about times and dates we do not need to write to you, for you know very well that the day of the Lord will come like a thief in the night”, he is saying that we cannot discern trends or purposes. He is saying that only the Lord knows when things will occur, and, if only the Lord knows when things will occur, then Paul advises us, in Verse 6,“let us not be like others, who are asleep, but let us be alert and self-controlled”.

Remembering the Great War, remembering the war that was to end all wars, remembering those who went away and never returned and those who returned but were never again the people they had been; remembering the families whose lives were permanently scarred, Paul’s words seem to have a particular aptness. August 1914 was not a consequence of great movements or tides, but was stumbled into by people who could not see what lay ahead; stumbling that led to the deaths of countless people who had no hand, act or part in causing the conflicts, but who paid with their lives in the four years that followed. Stumbling that led to changes by 1918 that could not have been imagined in 1914.

Clive Ponting’s book “Thirteen Days” gives an hour by hour account of what happened in Europe’s capital cities in the thirteen days leading up to the outbreak of the Great War in 1914. It has some very funny moments.

In London, Sir Edward Grey, the British Foreign Secretary did not speak French, which would not have been a problem if it were not for the fact that the French ambassador in London did not speak English in his meetings with Grey, and hated England so much that he went home to Paris at weekends. They would meet without interpreters; the history of Europe hanging on encounters between two men who did not understand each other. The tragi-comic slide towards the cataclysmic events wasn’t helped by the British Prime Minister, Herbert Asquith, who during the British Cabinet’s meetings sat at the table writing; not notes on what was being said by Government ministers about events that would change the world, but letters to his girlfriend.

Read Niall Ferguson’s “The Pity of War” and you realize things did not have to turn out the way they did. There was a momentum towards conflict, but it was not unstoppable. Read the accounts of the summer of 1914 and you get no sense that people have any idea that they are approaching a war of unimaginable proportions.

Paul is thinking about the end of the world when he says, “While people are saying, “Peace and safety,” destruction will come on them suddenly”, but they are words that are very fitting for August 1914.

“While people are saying, “Peace and safety,” destruction will come on them suddenly”, warns Paul in. Being Christian in our world means taking seriously Paul’s view that history is entirely unpredictable. It means asking serious questions about what is going on in our world, and not pretending that things that go on have nothing to do with us.

Paul expects us as Christians to be people of light, to be people who encourage others in the ways of peace, “since we belong to the day,” he says, in Verse 8 “let us be self-controlled, putting on faith and love as a breastplate, and the hope of salvation as a helmet”. Our armament doesn’t consist of guns and tanks and planes, it’s consists of faith and hope and love. The onus is on us as individuals; there is no opting out, we should not be surprised at unexpected events taking place in our world.

“You are all sons of the light and sons of the day. We do not belong to the night or to the darkness”, writes Paul. Remembrance is about bringing to mind the need to always remain alert for those who move like a thief in the darkness. It is about bringing to mind that we are to be people of the day and people of the light in a world where no-one knows what will happen.

History is just one thing after another—and through it all we watch for the moments about which Paul warned us, “While people are saying, “Peace and safety,” destruction will come on them suddenly”.