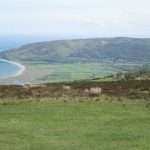 Do people still have picnics? Picnics with rugs and flasks and sandwiches and cake?

Growing up in the 1960s, there were few alternatives. The options for eating out were limited; in our corner of rural England there might be a fish and chip shop, a café that might serve sausage, egg and chips (or similar combinations, or a small country hotel where people would sit down for proper meal. The Wimpy chain had appeared, but the days of McDonald’s and Burger King and the other fast food outlets were still a distant future. Not that eating out was something that could be easily afforded, anyway – money was scarce. Except for the annual village outing to Weymouth, when fish, chips and peas in a café was a treat at the end of the afternoon, going away for a day meant a picnic.

Picnics were not such a bad option. My grandmother was a specialist at extracting good food from a raffia basket; there would be sandwiches, and cold sausages, Scotch eggs, and home made fruit pie and great slabs of fruit cake wrapped in greaseproof paper. The age of plastic had not arrived; tea would be served in proper cups, milk came from a screw-topped bottle and sugar was carried in a jar. (The grand maternal choice of menu became influential in adult years, when no picnic was complete without the sausages and eggs, supplemented by Melton Mowbray pork pies).

Sharing in those picnics was an experience of much greater intensity than most restaurant meals I have ever eaten. Perhaps there was a sense of something exotic in being able to choose where to eat, a sense of freedom in improvising a meal, but it was more a sense of the bond they created: there was something about sharing food with people in sometimes unlikely locations that gave the moment a special feeling. Even the dynamic of the meal differed from that at home, or in a restaurant or café; there was no hierarchy of seating, usual etiquette did not apply, and the meal usually depended on things being passed from person to person. At a picnic, there seemed an alteration in the usual social relationships, an equality, a sharing of an hour that might be unrepeatable.

The old-fashioned picnic is rare now. People still picnic, but is now it more a logistical operation with folding furniture and cool boxes and an accumulation of accessories, and little by way of home made edibles; tartan rugs and Thermos flasks are no longer common. The best thing about a picnic, though, remains unchanged – the location. What restaurant, or café, or fast-food outlet could match a National Park on a summer’s day?