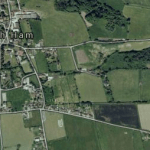 Days as a curate in the late-80s were not easy.  The paramilitary ceasefires were still years away; there were still plenty of atrocities to come. The extremists fed off the polarisation of the two communities and the middle ground was narrow and precarious.  There were moments when the hatred was visceral, and when just about anywhere else on Earth would have seemed attractive.

A ridge of hills rose steeply to the west and north of the town.  Driving one particular road brought you to open ground where you could stand and see for miles.  The green hills and the dark waters of the lough were the dominant features of the landscape, the town shrank to manageable proportions.  Standing looking down on the streets, a sense of proportion returned.  Those who caused so much upset were tiny people in a tiny town; the world outside was different.  The world had little interest in their strident opinions and aggressive ways and cared even less for their politics.  The people would invent their own political parties just as they invented their own churches.  The favourite memory of the place remains that hilltop vantage point, where the anger and the abuse of the religious and political hardliners could, for a moment, be kept at arm’s length.

Looking down from above can make the unpleasant manageable, but soaring around the world with Google Earth can also reduce those places with happy memories to the point of insignificance.  The home village in Somerset, never a big place, becomes no more than two or three roads dotted with occasional houses. Turn Hill, which seemed to a kid on a bicycle to be an inland cliff face, is reduced by the satellite view to a slope in the landscape.  Breakneck Hill in the Devon town of Teignmouth, which concluded a long walk up from the railway station,  is no more than a slight incline.  Dartmoor, where the school was surrounded by wild and open countryside, becomes a gentle and rolling place with pretty wooded valleys.

Years of working in a parish has taught the ability to stand at a distance; to disengage with the immediate reality in order to be able to get through the difficult moments; at times to see scenes as if through the lens of a television camera.  It allows one to remain impassive in all but the most extreme situations.

There’s some theological point to be made somewhere there, about engagement, about incarnation.  Perhaps the response to that town should not have been to sit on a hill looking down, but to try to identify with the pain that made the people the way they were – it would have been beyond me then; being honest, it probably still is.