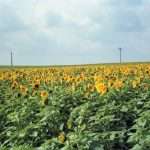 A harvest thanksgiving in a little country church, at a remove from the nearest village. A plain, Protestant place without cross or candles, filled literally to the rafters with people, for seating was so much in demand that the precarious gallery was fully occupied. Singing was so loud and enthusiastic that there were stanzas when the organist let the voices find their own way. The Sunday evening of a bank holiday weekend, television schedules filled with programmes supposed drawing millions, and people of all ages gathered for a church service. Teenagers arriving late fill a front pew. Afterwards, an invitation to tea in a local farmhouse. Four dozen people responded, and were seated, twelve per table, in the downstairs rooms of the house.  Tables laden with sandwiches, scones, apple pie, cake and tray bakes. A Scripture text takes  a prominent place in a glass cabinet of sports trophies, the Lord to be praised for sporting skill as much as for the harvest. The chattering classes who believe the church to be dying should be present at such moments.

The journey back follows a road that skirts the Co Wexford town of Enniscorthy. In the darkness of the late evening a sign appears pointing left, “Vinegar Hill.”

Vinegar Hill had always a mythological place in my memory. A precious Christmas present in times when money was not plentiful, an audiocassette of a Makem and Clancy live concert, included a recitation of Seamus Heaney’s “Requiem for the Croppies” as a prelude to the singing of “Four Green Fields”:

The pockets of our greatcoats full of barley…
No kitchens on the run, no striking camp…
We moved quick and sudden in our own country.
The priest lay behind ditches with the tramp.
A people hardly marching… on the hike…
We found new tactics happening each day:
We’d cut through reins and rider with the pike
And stampede cattle into infantry,
Then retreat through hedges where cavalry must be thrown.
Until… on Vinegar Hill… the final conclave.
Terraced thousands died, shaking scythes at cannon.
The hillside blushed, soaked in our broken wave.
They buried us without shroud or coffin
And in August… the barley grew up out of our grave.

It was July 1986 before we climbed Vinegar Hill. It is hardly prominent and there is little that would distinguish it from the landscape around, but Heaney had imbued the place with an indefinable quality. Years later, there is still a lack of words to capture the mood of that moment.  Perhaps it was not Heaney alone. Our overnight stop with a colleague in Enniscorthy was en route for Rosslare and for France; the very first of our many holidays there. Perhaps there is a retrojection of the deep happiness ensuing years would bring.

Harvest hymns and filled tables and Heaney and memories of summer days in France. A mythological evening.