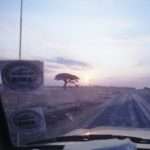 Yesterday’s Guardian newspaper in the UK reported on the debate on climate change. What is alarming is that after decades of debate, little seems to have happened to address the situation for those at the sharp end.

It was back in 1998 that I visited rural Tanzania. On the edge of a town, there was a hollow in the ground at the bottom of which a woman was digging. The fact that the road crossed the hollow by a bridge reminded passers-by that this ground had been a river. Our Tanzanian accompanier said she was digging for water.

He shrugged his shoulders. “Maybe two or three feet”.

The landscape around was arid scrub, the odd baobab tree broke the horizon. “I can remember when this place was green with trees. I have a photograph”.

“When was the photograph taken?”

“1970! You mean that in less than thirty years this has become a desert

The visit was intended to focus upon how international debt was affecting the country, but there seemed forces far more profound at work. Deforestation had not helped matters, but the empty river bed pointed to changes of a far greater scale; the whole climate of East Africa seemed to be changing.

The arid lands around the remote capital city had been reached by a two day jeep ride from the south-west of the country. It had been a grim journey in which my two African companions had said little about the countryside through which we had passed. People lived at the roadside in houses that were literally no more than mud huts. The poverty was absolute, in two days of driving the bright spots could have been numbered on the fingers of one hand.

The journey had begun barely more than sixty miles from the Mozambique border. At one point a group of tribesmen with a cluster of bony cattle crossed the road, one of the few roads in the region.

He paused, reflectively. “I have never seen them so far south”.

The southward drift of the Maasai had been caused by the lack of grazing for their cattle. They had shifted far from their traditional regions. A lifestyle that had endured for millennia was under threat from forces far beyond the control of the tribesmen.

“Will there not be trouble with local farmers?”

Since humanity became farmers and pastoralists thousands of years ago, there has been competition for the best land. Read the book of Genesis and there is a conflict over resources:

Now Lot, who was moving about with Abram, also had flocks and herds and tents. But the land could not support them while they stayed together, for their possessions were so great that they were not able to stay together. And quarreling arose between Abram’s herdsmen and the herdsmen of Lot. The Canaanites and Perizzites were also living in the land at that time.

For people living at the sharp end of things, there is not the option Abram and Lot had to go their separate ways; people must live together or they will die together. If nothing is done, the conflicts will only multiply and the research and the reports will continue without resolution.