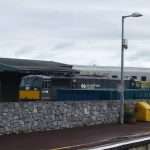 Unfortunately, I could. Cutlery has its own feel, food doesn’t seem the same if it’s not eaten with the preferred cutlery, or served on the favoured china. Swapping one spoon for another seemed quite reasonable behaviour, in fact, swapping an entire place setting would not seem so unreasonable. The morning cup of tea certainly does not taste just as it should if the usual mugs are in the dishwasher and porridge always tastes better in a particular dish.

Perhaps everyone has compulsive traits, perhaps they are more manifest in men. A friend tells of a railway history society where a mistake about some minor detail of engineering, or buildings, or livery is considered a virtual heresy. Within the church, there are many who would become severely agitated if there were some detail of the liturgy or obscure point of doctrine not correctly observed.

Compulsiveness seems not often to be about big issues, important matters, but about those things that most would regard as trivia, as things barely to be noticed and certainly not worthy of a fuss being made. If one subscribed to his thinking, there would be something deeply Freudian about a compulsive attention to detail.

Reading John Boyne’s novel A History of Loneliness, anachronisms spoil a personal enjoyment of the story. Something costing forty pence when the chapter concerned is set in pre-decimal times; a sixteen year old in 2001 being described as studying for his intermediate certificate at school when it had long been the junior certificate; and an actor in 1964 being said to have gone to visit Sean O’Casey on Dublin’s North Circular Road when O’Casey left Ireland to go to live in exile in England in 1938 and never returned and suffered poor heath that led to his death in 1964. The details are material neither to the plot nor to the characterisation and have a disproportionate effect in distracting attention from the unfolding of the story; they would not have even been noticed by someone outside of Ireland.

A compulsive attention to detail, whether in the pages of a novel, train numbers, or the conduct of worship in church, causes greater unhappiness to the the person concerned than to anyone else, something to be noted by those who have to deal with those of us who get annoyed by wrong cutlery and inexactitudes.