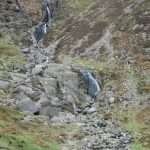 The Christmas holidays bring the return of the younger members of the household and marathon length viewing of films. The watching of The Lord of the Rings has reached the third of the films, Return of the King, which brings a moment when we compete to do an impression of Aragorn.

“Let the lord of the Black Land come forth! Let justice be done upon him!” Aragorn shouts, in an accent that is that of the English West Country.  An uncle at home in England could do the voice perfectly; but, being the only one in our household born in Somerset, I win the competition in our house every time.

The extended edition of The Return of the King is played to watch all the favourite parts, it has clips left out of the cinema version, including some important parts that are integral to the story. We know the storyline, so there is always the temptation to skip the ponderous bits with Frodo Baggins and move onto the next action sequence.

The moment for the Aragorn impression appears only on the DVD. The heroes are before the Black Gate of Mordor, their puny force an attempt to detract the attention of Sauron, the dark lord, away from Frodo Baggins’ progress towards the destruction of the ring that would have given Sauron absolute power had he come to possess it.

The Mouth of Sauron, a spokesman for the dark lord, comes to the gate, ostensibly to negotiate, but in reality to gloat and leer at the small force mustered to attack the might of Mordor. He is a loathsome creature who attempts to suggest that Frodo had died horribly and that they will share his fate.

In a moment that was like something from a story of King Arthur, Aragorn, a leader of the good guys in the story, rides up alongside Sauron’s spokesman and with a sudden swipe of the sword chops off his head.

“Well, that appears to conclude negotiations”, says Gimli, a fearless friend of Aragorn.

We laugh each time Gimli speaks the lines. The director of the film clearly intended to inject humour into the moment, but why did he think humour appropriate in a moment of high drama?  What is it about Gimli that endears him to viewers and allows him to have some of the best lines?

The Mouth of Sauron represents the arrogance of those who regard little people with contempt and who attempt to sweep aside, with force if necessary, anyone who challenges their power.