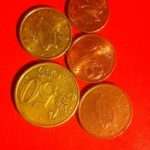 A late Christmas gift was unwrapped this afternoon. “Oh, what lovely chocolates. They are Marks and Spencer. They are too good for eating. We’ll keep them to give for something.” There was no denying that they were quality chocolates and there would be an inclination, when eating them, to wonder how much each mouthful might have cost. Frugality is a way of life: nothing bought without thinking what other things might be bought for the same money, nothing consumed without wondering if it might be put to better use. The luxury chocolates will become a prize to be claimed at a church function and there will be the consolation that further unnecessary calories have not been added to those already accumulated over the Christmas season.

It is an attitude that would not please the retailers’ association, Retail Excellence Ireland, who complained that consumers had not spent more in the days leading up to Christmas, “the fact is that seven years of frugality is a hard habit to break. The expectation was that the last few days before Christmas would be buoyant, unfortunately trading failed to ignite across Ireland.”

The suggestion that “frugality” was a “habit” that needed to be broken seems bizarre when one considers that a decade of profligacy broke the country and countless individuals, a little more frugality and the gentlemen from the European Central Bank and the International Monetary Fund might not have taken control of the affairs of the nation.

To some people frugality comes as second nature, whatever the state of the economy. A friend in Dublin tells a story of clearing the house of an elderly aunt after her death and finding a jar labelled, “Pieces of string too short to be of any use”. It was a story of frugality in the Ireland of the 1950s, and the friends telling of it prompted great laughter, but it was also a story of an attitude that kept debt and bankruptcy away from the door.

Frugality may be a hard habit to break, but it means knowing the value of things as well as the price of them. The aunt could think of no purpose for the fragments, but set them aside in a jar in confidence that at some point there would be a purpose to which they could be put. When the easiest thing to have done would have been to toss the string onto the fire, the lady set the pieces inside a glass jar. More than that, she went to the lengths of writing a label and sticking it on the jar – a declaration that while recognizing that they might command no monetary price, they might have some future value.

In terms of a box of chocolates, the aunt would probably have similarly concluded that their greatest value lay in not eating them. Without even being aware of it, the lady was applying the economic concept of opportunity cost to everyday life – if I eat these now, what opportunities for their use do I forego?

What Retail Excellence Ireland describe as “the habit of frugality” is actually sound individual economics. It might mean missing out on chocolates, but it also means missing out on debts.