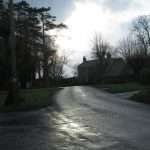 Why do people celebrate New Year? It seems odd. It’s not as though we are like elves from a Tolkien novel, able to be around for millennia; our time is fairly limited. What do we get? Maybe eighty years, maybe less. Why would anyone want to celebrate that one of their eighty years has gone beyond recall? Why would anyone want to celebrate that they are a year nearer the end than they were 365 days ago? It is baffling.

Perhaps New Year celebrations arise from a sub-conscious bravado, a thumbing of the nose at the passing of time, a carefree attitude towards mortality. Perhaps they are a declaration that people do not care that their life is passing, for what else is being celebrated other than the passing of time? If one has had a good year, surely one does not want it to pass, and if one has had a bad year, surely there is a desire to find better days before the year ends and there is nothing left of it except bad memories?

Time is the most precious thing we have, why express joy at its loss? Vera Brittain’s Testament of Friendship has sobering lines.

“On one of the coldest mornings of that spring, after she had learnt from a London specialist that she might not have more than two years to live, she went for a walk past Clare Leighton’s cottage to a farm further up the hill. She felt tired and dejected; her mind, still vigorously alive in her slow, impaired body, rebelled bitterly against her fate. Why, she wondered, should she, at thirty-three, not yet in the fullness of her developing powers, be singled out for this cruel unforeseen blow? She knew, for the constant demands of her friends had made it clear to her, that her life was infinitely valuable to others. She thought of all the half-dead people who ‘put in time’, as though time were not the greatest gift in the universe, while she, who could use it so superbly, was soon to be deprived of it for ever; and she felt that her mind could hardly contain the rising anguish of that realization”.

Perhaps it is too many years spent standing at hospital bedsides, visiting grieving households, struggling to articulate meanings, that have jaundiced the perception of New Year, but, surely, 1st January is a day to ponder time that was wasted, time that was thrown away, time that was killed?